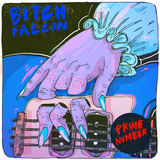 The track is released ahead of their UK "About to Break" Tour with DRONES, Intechnicolour and Haggard Cat, (***commences on 31st October in Cardiff and runs throughout November 2018)

BITCH FALCON are a rock trio from Dublin, Ireland.

Following on from an initial explosive emergence, the Dublin-based three-piece haven’t so much discovered their voice as relentlessly refined it. If anything, they relish in sharp declarations, their signature sound always moving forward even when throwing a nod to the past.

Their aesthetic is raw, even a touch frenzied, yet the chaos is controlled in a ferocious through line that harnesses the strongest elements of rock, grunge, metal, hardcore and melodic electro-pop. Through it all, Bitch Falcon make this busy mix sing in a distinctive, once-heard-not-forgotten voice.

Pulsating tracks like ‘Wolfstooth’, ‘Syncope’, ‘TMJ’ and ‘Clutch’ speak to a band unwilling to sit still and stay quiet. These are songs of punch, grit and verve. Up close and personal, the band make an even greater impact as their deserved reputation as one of Ireland’s most engaging live prospects comes to the fore.

● 2 sold out headline tours, including selling out Whelan's and The Workman's

● Played leading festivals such as Electric Picnic, Other Voices,

● "Of Heart" - Hot Press Track of the Fortnight

● Television appearances on Other Voice and RTE

● "Of Heart" nominated for Best Video in Young Director's Awards 2018

● Support for Black Peaks and In Technicolour on tour


For more info contact Rhys B at Martian PR - promo@martianpr.com