TUNE Ben Russell And The Charmers - The Golden Sun 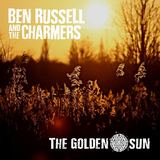 "Great band, really enjoyed [Ben Russell and The Charmer’s] sound. With amazing vocals from Ben and great blend of harmonies from Mel. Keep up the good work!"
Sir Bob Geldof

‘The Golden Sun’, which was exclusively handpicked by David Rodigan (BBC Radio 1Xtra), showcases Ben Russell And The Charmers songwriting as much more than standard reggae filler; highlighting on optimistic tones with a realistic and down-to-earth honesty matched with sunbleached guitars and echoing percussion lifting the chorus to effortless heights; elevating their clear traditional influences to a new sound which is becoming acclaimed by audiences and critics alike. Having crafted much of their sound on the live circuit, Ben Russell And The Charmers are evolving with each stage they step out on; being continually booked year upon year, having their songs exclusively picked by Boomtown Fair to officially advertise the festival, as well as featuring on Boomtown Fair’s Annual Xmas Compilation CD for Charity two years running, not to mention plays on Glastonbury Festival’s official on-site radio station, Worthy FM.

Front man Ben Russell, originally from Wollongong, Australia, has travelled all over the world searching for the sound we’re all hearing today. After embracing this long sought for sound and enlisting the backing of ‘The Charmers’, Ben Russell And The Charmers have been playing to a wide array of shows across the UK and Europe, refining their sound and attracting the applause from the likes of Sir Bob Geldof and David Rodigan (BBC Radio 1Xtra); leaving indelible marks on their audience; ensuring everyone who sees them leaves with their very own Ben Russell And The Charmers experience - Experience their new single ‘The Golden Sun’ now - officially out on the 2nd of August 2017.