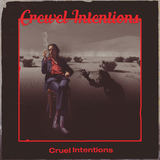 Chilli Jesson is on stage at Glastonbury, playing to thousands of feral fans having recently graced the cover of the NME.

Chilli Jesson is working behind a bar, signing his own name in a pint of Guinness at the behest of a confused punter.

Chilli Jesson is at home in South London, kicking open the doors of his past and concocting a new world rooted in cowboy melodrama and very personal experience in equal measure.

Over the past three years, all of these statements have, in turn, been true.

Thrust into the limelight aged 19 as the scene-stealing bassist and occasional singer of Palma Violets (it's he that penned the band's inaugural call to arms 'Best of Friends'), Jesson and his then bandmates created an almost immediate mythology. Rooted in the ramshackle charm of The Libertines and other such gangs of hedonistic, poetic pals before them, their Lambeth base Studio 180 and the twinkle-eyed high jinx that seemed to trail them at all times immediately made the quartet an effortlessly attractive proposition. A flurry of music press devotion followed, and then a legion of fervent fans, and by 2015 the band had released two albums – narrowly missing out on the Top 10 with their first and earning themselves sold out tours and a few awards along the way.

Then, to the outside world, the band simply disappeared. “If you listen to those couple of records that we did together, it was definitely like, that one's a Chilli song and that one's a Sam [Fryer, the band's main vocalist] song, but they kind of worked. And on the second album they still kind of worked. But we were going our separate ways musically and we both clocked that it wasn't going to work as an album the next time,” Jesson recalls. “So we played one last show at 180 with a few friends there, nothing dramatic, and that was it. They went together and I was left on my own with a load of songs but no band, no nothing. It was quite a weird feeling.”

Despite his assertions that he was “just a glorified bass player”, throughout the Palmas' tenure in the spotlight it was always Jesson that inadvertently pulled focus. The main mouthpiece in interviews and a barrel of wild, tumbling rock'n'roll energy on stage, he once found himself gracing a national magazine cover after a particularly memorable Reading Festival set without the rest of his band or their frontman. It seemed natural, then, that for his next move he would step fully behind the mic himself, but the route to what would eventually become the cinematic, visceral world of Crewel Intentions – the new outfit that fully realises all the magnetic potential Jesson always promised – was a long one. “It's a coming of age thing,” he nods. “I love Palma Violets and I love what went down but I needed to find my own voice.”

Though the singer – still only aged 22 when his former outfit called it a day – already had the beginnings of a new canon of work from the material he'd begun working on previously, he was keen not to repeat the whirlwind conveyor belt that he'd been on before. “We were signed off of four songs to Rough Trade, but then you're on the treadmill and it's onto the next thing, onto the next thing,” he explains. “The ten songs on that first album, that was it. We never had a backlog of songs and this time I wanted to fill that vault.”

Allowing himself the time to fill the vault, however, meant swallowing his pride. He got a job, shouldered a string of “fuck, aren't you...?” interactions and, for the first time since he'd left college, lived the life of a normal bloke. “I had no perspective before. Just nothing. You've got to envision that rollercoaster and then it suddenly stopping...” he muses. “It was all fun, but now it's like, well I need to get myself out of this fucking rut. But I like to prove myself to people – and I've got a lot of people to prove myself to.” He continues: “With anything remotely creative you've really got to follow a dream. It has to be real and you have to put a lot of your energy and time into something that is ultimately just in your mind, but it's so important.”

So, over the weeks and months that followed, Chilli began fleshing out that dream – one based in harnessing the energy that he'd always been known for but taking it in new directions. And through it, a more personal tale began to emerge as an underlying thread.

Jesson's father died when he was young. Amidst “the whirlwind” of life since he left school and from “never wanting to be that serious”, it's a subject that he'd never really acknowledged in his music previously. But it's one that came to underpin Crewel Intentions' emerging catalogue almost without him realising.

First, there's the undeniable influence of Nick Cave that rings through both the stormy, narrative-laden tracks that Chilli had began to craft and the singer's own theatrical on-stage performance. Jesson's father had previously managed Cave and, as a child, Chilli would go to his shows, growing up around the hypnotic star. “I never spoke about it because I always thought people would think there was some kind of nepotism involved, but of course he was a huge influence,” he says now. “I used to know every single lyric to the saddest, darkest songs and play them to friends at school who thought I was a fucking freak.”

Then, there's the Morricone-inflected, western melodrama that infuses the root of these new tracks: tracks that sing with electric theatricality and an ambition above that of your token indie band. “I grew up watching those films with my father,” he notes. “And the great thing about Morricone and all those Clint Eastwood films is that they managed to create something epic-sounding but on a shoestring.” Even in terms of writing, Chilli has been working alongside poet sister Georgie to fully harness the stories that he's now ready to tell.

Along with creative foil and producer Marley Mackay and his live band – drummer Jordan Cook of Telegram, former Gallon Drunk and Yak member Leo Kurunis and keyboard player Rupert XXX, it's a fully realised and three-dimensional world that Chilli and Crewel Intentions are crafting. So far, they've only played a handful of small, low-key live shows, honing their wares and testing the waters before deploying the last 18 months of creative stockpiling (“At the moment we've got about 30 songs, which is a shitload considering I'd only written about six in five years before and I'd lived off one...” he chuckles). But now, Jesson is finally ready to unveil the fruits of his labour and step into the place that he's always obviously belonged, front and centre. “I felt like a bit of an imposter before because I was enjoying myself and that's all I had in that band. But now I'm at the point where I've really got something to say and that's what this whole thing's about,” he notes. You'd probably best listen up, then.