Back to Maura Kennedy's Music <
Album 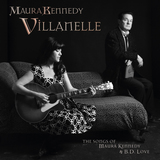 Villanelle: The Songs Of Maura Kennedy And B.D. Love

Four Star Review of "Villanelle: The Songs of Maura Kennedy and B.D. Love" by Allan McKay, Musicriot.co.uk, May, 2015 “Villanelle” is the second installment of a trilogy of albums released by Pete and Maura Kennedy in 2015. It’s a Maura Kennedy solo album but, not surprisingly, Pete’s a presence throughout, playing electric guitar, banjo, mandolin, organ, glockenspiel bass and drums. The album is a collaboration with Californian poet B.D. Love which was hatched in the summer of 2014 as a creative challenge. B.D. Love provided Maura with a set of poems which she had to be turn into songs without changing their structure. Now, that may sound like an interesting academic exercise but the project has produced some of the most beautiful songs I’ve heard this year by fusing poetic forms with a range of musical settings from across the Americana spectrum. At fifteen songs long, I’m not even going to attempt to feature every song; there isn’t a bad, or even an average one, so I’m going with a few of my personal highlights, in no particular order. “She Worked her Magic on Me” is probably the most light-hearted of the lyrics; full of wordplay and double entendre, it’s a joyous romp of a song telling the tale of the amorous exploits of a magician’s assistant, featuring a nice gipsy jazz nylon-strung guitar solo from Pete. It’s not typical of the songs on the album, but it’s great fun. “Be the One” sounds like 1972 all over again with a groove that’s somewhere between Carly Simon’s “You’re so Vain” and Steely Dan’s “Do it Again” as a backdrop for a relatively straightforward love poem. As a bonus, Pete builds up the texture and atmosphere with some very moody organ. “Borrowed Dress” is a very feminist piece showing the human cost of economic migration and ending with a prayer that the daughter of the central character will live a better life because of her mother’s sacrifice. It’s heart-rending stuff set against an appropriately Mexican-tinged arrangement. “Darling Cutter” isn’t just heart-rending, it’s harrowing; the back-story is established quickly before plunging into a cycle of alienation and self-harm which the narrator can see and is trying to break, although there is a hint at complicity. The contrast between the lyrical darkness and the uptempo, almost jaunty, feel of the song helps to emphasise the pathos of the events which unfold. If you ever need an example of perfect track sequencing on an album, here it is; the song following “Darling Cutter” is the absolutely gorgeous “I Cried to Dream Again”, which is inspired by Caliban’s famous dream speech in “The Tempest”. The theme of the song is an unrequited love, but the musical setting and the achingly beautiful chorus feel like a resolution to the previous song’s darkness. There’s no argument here about whether song lyrics are poetry or not (and that’s a discussion I’ve had a few times) because that’s how these lyrics started. Maura Kennedy has risen to an incredibly difficult technical challenge by crafting arrangements across a wide variety of styles which enhance the poetry and, as always, her lead and harmony vocals are perfect. When you add Pete Kennedy’s multi-instrumental skills to the mix, the result is an album that’s technically flawless and packed with feeling and emotion. You can’t ask for much more than that. “Villanelle – The Songs of Maura Kennedy and B.D. Love” is out now on Varèse Sarabande (302 067 339 8).