TUNE Love Nor Money - Shake Me 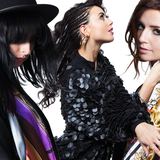 Love Nor Money - Shale Me
Label - Lost in the Manor Records

Lost In The Manor is proud to announce that the inaugural release on its brand-new label will be the sparkling strum’n’bass epic, ‘Shake Me’, by London’s vital female tech-pop trio, LOVE NOR MONEY. Released as a digital single on 6th July, ‘Shake Me’ will form part of the group’s debut EP, to be released on limited-edition vinyl and across all digital outlets later this year.

Part glittery guitar-thrash stomp, part sweaty-browed electro pop, Love Nor Money don't so much demand your attention, as dance in your face till you can't ignore them. Which is clearly a great thing. Matt Everitt, BBC 6Music

A band that’s got presence and sound, Love Nor Money are going somewhere spectacular.
Vince Power

About ‘Shake Me’
An ingenious euphonic cocktail of analogue and digital beats, new-wave guitar sonics and anthemic vocal, ‘Shake Me’, like every great night out, starts off rich in delicious suggestion and steadily ups the energy levels. Oozing a controlled assertiveness to underpin the melodic lyrics – an encouragement to shake off emotional negativity and awaken body and soul – the song’s infectious rhythmic resilience builds over future-funk breaks and bold guitar chords before exploding in a climactic rush of high-tempo, booty-shuddering jungle. The video, by Phillip and Rupert Sansom, was shot at a themed East London rave party, and brilliantly captures the no-holds-barred hedonism of the Love Nor Money live experience, a perfect foil to the life-affirming ethos of ‘Shake Me’.

About Love Nor Money
Take three women – two of whom are sisters – comprising a soul singer, a professional dancer and an aficionado of the scuzzy six-string, and bond with a penchant for North London squat parties and a passion for vivid danceable pop. The result? Dynamic alt.rave three-piece LOVE NOR MONEY. As equally at home at warehouse parties as urban ballrooms, LNM’s scope is reflected in the breadth of artists they’ve been compared to, from Grace Jones to Destiny’s Child, Radiohead to Rudimental and Candi Staton to (yes, there are glimpses) The Spice Girls. Like Haim refurbished by The Prodigy, Sonic Youth gone reggaeton or Major Lazer in cahoots with The Slits, Love Nor Money exude a vibe that encompasses both old-skool garage and DIY guitar indie. Bess Cavendish (lead vocals), Jayna Cavendish (backing vocals, drums and dance) and Anna Tosh (guitar) have been cherry-picking their performances thus far to best project their aerobically intense and attention-grabbing live show, and have shone on diverse stages at The Notting Hill Carnival, The Port Eliot Festival, Oval Space and the Blade Runner-themed Secret Cinema event, drawing plaudits and punters at a phenomenal rate. With a flush of instantly catchy dancehall hooks now committed to tape, and soon to be released by Lost In The Manor, the band’s wider renown is inevitable.