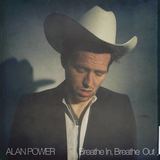 Breath In, Breathe Out

Artist: Alan Power Title: Breathe In, Breathe Out Label: AWAL Impact Date: 10th July 2020 Alan Power has returned with stunning new single 'Breathe In, Breathe Out'. The first single since releasing his acclaimed debut album Greatest Hits Vol.1 last year, 'Breathe In, Breathe Out' was written in 2019, yet holds remarkable resonance to today's circumstances, tackling feelings of impending doom, fear and anxiety at things beyond our control. The track builds upon the sonic foundation Power has laid down over the years, as fingerplucked guitars ring out over a simplistic drum machine backbeat, creating a glorious expanse that allows his signature crooning vocals to cut to the core with emotive delivery. Speaking about the single, Alan Power said: "I wrote this song last year as a commentary on what I saw as the commodification of things like ‘wellness’ and ‘lifestyle'. A year or so on, it chimes with the times in a way that I could never have anticipated. With fear and anxiety playing such a big part in our daily lives, I hope this song can provide the odd moment of calm. I’ve decided to donate the proceeds to a hospice local to where I live, Dorothy House. They are a force of good in our community, looking after the elderly and the sick so I hope I am able to contribute something in this time of need” More information on Dorothy House can be found here. More info on Alan Power Alan Power is a UK based singer/songwriter and, like something out of Phoenix Nights, Power emerged from nowhere in 2018 following a series of much talked about live appearances. Spending the latter half of that year making a debut album and touring extensively, he sold out two London shows with no music online, and shared a stage with The Vaccines, Matt Maltese, Jack Ladder, Spector, Nick Allbrook and The International Teachers Of Pop among others. His music is rooted in traditional country and folk with notable leanings towards the abstract, post punk and experimental. Alongside this, his live show has provoked attention for its unconventional nature and unpredictability. Following the critically lauded debut album Greatest Hits vol.1, 2020 will see Alan Power enter into his next era and it promises to be his most intriguing yet.