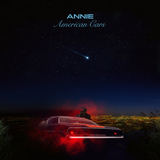 Artist: Annie Title: American Cars Label: Annie Melody Impact Date: 21st August 2020 Norwegian pop superstar Annie steps back into the limelight with her single American Cars, a prelude to her forthcoming album, the opulent and extraordinary Dark Hearts. On Dark Hearts, released October 16th Annie, collaborates with Swedish producer Stefan Storm, the architect of synth outfit Sounds Of Arrows. Described by Annie as “the soundtrack to a film that doesn’t exist” the beautifully strange and strangely beautiful Dark Hearts takes inspiration from everything from Twin Peaks to The Wicker Man. The album’s debut single American Cars is the soundtrack to blacked out skylines, abandoned downtown city districts and empty highways and continues the cinematic theme. Says Annie “it was partly inspired by the David Cronenberg film Crash. It was 2pm and the only other people in the cinema were two old men, a mum and her screaming baby, and sixteen-year-old me. It was quite a strange experience. The film is about pushing it to the edge. When you’re looking for something dark you don’t necessarily know why you’re doing it. But you’re pushing the boundaries. You can fall, or almost fall, but you climb back.” Dark Hearts evolved over three years, a stop / start process the result of Annie becoming a mother to two young children and her move from Berlin to Bergen. “I did a lot of recording while I was pregnant, puking while I was singing. Stefan had to go out to buy me liquorice, but I still managed to do some quite good vocals.” But taking her time has resulted in Dark Hearts being “the best album I’ve done so far. All the tracks fit so perfectly together - the themes are right there.” Hitting the zeitgeist on the first wave of filesharing, Annie’s debut single Greatest Hit was a global underground smash. Her debut album ‘Anniemal’ on London’s hip 679 Recordings featured the Royksopp-produced Heartbeat and Chewing Gum and her first single with Richard X. Her move to a major label in 2007 didn’t work out as planned and the defiantly titled Don’t Stop was eventually released on Oslo indie Smalltown Supersound. “I didn’t do big pop stuff but I wasn’t underground either,” she reflects. “I was somewhere in the middle. Back then it was a challenge because labels couldn’t categorise me.” In the last few years she’s embraced that independence with a string of EPs like The A&R EP and Endless Vacation, and one-off singles such as 2014’s Lil Lous-inspired, Putin-baiting Russian Kiss. Annie’s first album in a decade is packed with wistful reminiscences, perhaps not surprising as Dark Hearts marks Annie’s twenty years anniversary as a pop presence. Putting the unfaltering quality of her melancholy disco anthems aside, Annie offers her own succinct reasoning: “I’m simply a very stubborn person.” Dark Hearts is on its own terms perfectly poignant, perfectly strange and perfectly crafted pop. It’s the story of an artist on a journey, destination unknown. “I still don’t know exactly where I belong,” says Annie “but I know I belong somewhere.”