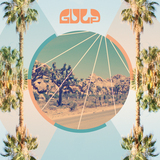 Artist: Gulp Title: Vast Space Label: Sonic Cathedral Impact Date: 21st July 2014 Vast Space is the new single to be taken from Gulp's forthcoming debut album, "Season Sun" (out July 14th). "The Wicker Man getting fresh with Nancy Sinatra. That's Gulp: easy to swallow, hard to forget." Guardian Guide, single of the week What is it about the Celtic hills of the UK that allows for such deliciously askew pop to run through it? From The Beta Band and Arab Strap in Scotland to Wales’ Gorky’s and Super Furry Animals, the stillness of the valleys has provided music that’s anything but. The Furries are a good starting point if you want to understand Gulp – the latest and perhaps brightest group to emerge from the lush green of Britain, armed with a dazzling potpourri of textures and melodies; the duo’s Guto Pryce co-founded the now-legendary psych-heads over 20 years ago. However, Gulp’s breezily brilliant debut LP ‘Season Sun’ glimmers brightly of its own accord, a refreshingly optimistic antidote to the creeping pessimism of modern life. Ostensibly the genesis of Pryce and his partner – synth player and vocalist Lindsey Leven – Gulp evolved from the pair collaborating with each other at home, to take in a full band setup that now includes guitarist Gid Goundrey and former Race Horses drummer Gwion Llewelyn. Though distancing themselves from any idea of a manifesto (“’No Manifesto’ is our manifesto” jokes Pryce), Gulp have continued in the vein of their debut 2012 7” ‘Game Love’ / ‘Diamonds In The Sky’, in making positively airy music that comes influenced by nature and intends to galvanise the spirit and replenish the soul; put simply: they want to make us happy. And they do it well. “We wanted to make a sunshine pop record,” states Pryce simply. “Happy vibes, get people smiling and dancing.” Leven agrees; “Take [second track] ‘Let’s Grow’,” she says, “In a world where everyone seems so busy and caught up in technology, it’s a reflection of the simple things in life: dreaming of living self-sufficiently in the countryside, the beauty of watching plants grow and thinking of just how these simple things can be so pleasurable in a world that can be full of angst.” The themes within ‘Season Sun’ stretch out more universally than that too; ‘Grey Area’ is about love and how it alleviates an otherwise grey existence; ‘Hot Water’ and ‘I Want To Dance’ are more basic than even that, an ode to swimming and a self-explanatory title respectively, the latter sounding something akin to Abba re-interpreted by Jean-Michel Jarre in its cosmos-searching disco grooves. Then there’s ‘Seasoned Sun,’ from which the album’s title derives from: “I wrote it looking out the window of our sitting room one morning when summer was moving into autumn,” says Leven. “The colour of the sun was amazing, I almost wondered what it would taste like. It explores a need to celebrate the simple things in life – a colour of a leaf or a memory of an eerie looking tree that once caught my attention – and enjoying these things with someone else.” However, though the messages within are immediate, the ways in which the pair get there are anything but. Relying heavily on a menagerie of battered old analogue equipment, Gulp recorded and self-produced the record in a variety of places over two years; their own basement, several studios in Cardiff Bay and even a friend’s kitchen and a local community centre classroom proved more than adequate surroundings for the pair. “It was a relief from the ‘perfection’ of computers and brought some humanity to proceedings” Pryce says of the analogue-led creative process. “They're temperamental and the process is of the moment - you turns knobs until you find a sound you like, play the riff and record it. You’ve got to commit right there.” Though much of ‘Season Sun’ chimes with a warmth and optimism, with Leven’s aerial vocal and a pattern of delicate guitar melodies placed over a bed of rich electronics a constant; there are an inordinate amount of exit points and rabbit holes to delve down on this record. The pair deftly weave from ’60s-influenced psychedelic pop to European motorik and synth-prog wanderings, evoking – not entirely coincidentally – the sense of a journey. Some of these songs, after all, were written while Pryce and Leven were road tripping in the California desert, others while holidaying through the Scottish Highlands. “We love to travel and I think a lot of the feel and inspiration for the album has come from places off the beaten track” says Leven. “It’s desolate yet warm. We enjoy listening to movie soundtracks whilst traveling and this has perhaps shaped some of our music.” You might say it’s given it the perfect seasoning. Gulp are: Guto Pryce and Lindsey Leven Produced by: Guto Pryce and Lindsey Leven Mixed by: Cian Ciaran Tracklisting: 1. Game Love 2. Let’s Grow 3. Clean And Serene 4. Vast Space 5. Grey Area 6. Seasoned Sun 7. Play 8. Hot Water 9. Everything 10. I Want To Dance