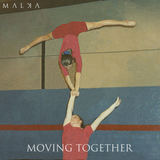 Artist: Malka Title: Moving Together Label: Tantrum Records Impact Date: 6th March 2020 Scottish multi-instrumentalist MALKA has released her brand new single ‘Moving Together’. The new song is taken from her forthcoming third album I’m Not Your Soldier out February 28th. ‘Moving Together’ is a bright psychedelic reverie featuring shimmering synths, world music percussion and an irresistible funky bassline. The song finds MALKA exploring the feelings experienced in the reestablishment of old relationships. Regarding the single MALKA says, “‘Moving Together’ is about reconnecting with an old relationship - whether it is a friend, a partner or a family member - and everything feeling just how it was before you had lost touch. The move back from London to Glasgow awoke all kinds of nostalgia for me, being back in my hometown, reconnecting with old friends and feeling like time had melted away. I wanted to create something that projected those feelings – ‘Moving Together’ in time with someone that you had previously been out of sync with.” ‘Moving Together’ is the latest song to be taken from MALKA’s forthcoming album I’m Not Your Soldier and follows the release of ‘Taking It Back’ and ‘Tiny Fires’. BBC 6Music have been great supporters of MALKA with Chris Hawkins, Amy Lamé and Lauren Laverne all playing past singles. I’m Not Your Solider is produced by Paul Savage (Mogwai, Franz Ferdinand, King Creosote) and is a reflective record that finds MALKA at her most personal yet, following the release of her politically charged album Ratatatat in 2017. While the new record is awash in dark fuzzy bass and haunting synths, its intimate depth comes with uplifting lyrical content. At the core of MALKA is honest songwriting. Whether that is day-glo, clattering brilliance or a pared-down hymnal for bedtime, MALKA always remains true to herself. I’m Not Your Soldier confirms a talent for all seasons. MALKA will be touring in support of the release next year and will play four headline shows across the country in March 2020. I’m Not Your Solider will be released on all DSPs, CD and unique eco-vinyl. The latter is created from recycled vinyl runs, cutting down waste and also offering fans the opportunity to own a one-off piece of vinyl, as no two are the same pattern or colour. MALKA MARCH HEADLINE TOUR DATES 6th – Glasgow, Stereo 12th – Galashields, MacArts 13th – Manchester, Eagle Inn 14th – London, The Victoria