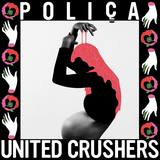 Artist: POLIÇA Title: Wedding Label: Memphis Industries Impact Date: 18th March 2016 Following their rapturous return at the end of 2015, Minneapolis’ POLIÇA are today sharing their new single, ‘Wedding’ - the second track to be taken from their upcoming album United Crushers (due out March 4th on Memphis Industries. ‘Wedding’ provides another glimpse into the band’s third record. Featuring a thunderous rhythm which builds and provides the underlying tension whilst Leaneagh’s vocals and harmonies glide atop; following on from the dustbowl electronic soul of the album’s first single ‘Lime Habit’. The band, which includes Channy Leaneagh, dual drummers Drew Christopherson and Ben Ivascu, bassist Chris Beirden and producer Ryan Olson, collectively wrote the album in their hometown in the winter of 2014, during their first true break from two years of touring. Recorded at the renowned Sonic Ranch Studios in El Paso, TX - nestled a few short miles from the Mexican border - the album builds on POLIÇA’s signature synthesizer and percussion-heavy sounds. Taking in more complex arrangements and a bigger, crisper hi fi punch. There's a tighter groove to these songs and a more vulnerable quality to them, especially in Leaneagh's singing. Her incredible vocal range is on display throughout, beautifully raw and less electronically effected than on previous recordings. Whilst thematically the album is both political and personal; touching on social injustice, self-doubt and isolation, urban decline and gentrification, overcoming music industry machinations and finding true and honest love in the wake of it all. Even at its darkest, United Crushers is musically the band's most upbeat and celebratory; a weapon meant to empower the weak, the forgotten, and the disenfranchised. *** More info on United Crushers below.. United Crushers is the follow up to 2013’s ‘Shulamith’ which EW described as being "propulsive enough for dance floors, and dreamy enough for headphones" and MOJO said "proves that intelligent pop music still has the ability to seduce and enthrall." Their debut, 2012's ‘Give You The Ghost,’ also garnered international acclaim, with Rolling Stone hailing it as "the sound of heartbreak and celebration happening simultaneously" and Q praising it as "a bewitching, urgent, magical debut." The band has conquered massive festivals around the world from Coachella to Glastonbury in addition to performing on Late Night With Jimmy Fallon, Later With Jools Holland and more. The band will play a series of shows in the lead up to the album release kicking off in Paris on 9th Feb, with stops in Berlin (Feb 11), n London (Feb 15), NYC (Feb 19) and Chicago (Feb 22), culminating in three hometown performances in Minneapolis March 2, 3 and 4 and followed by a full US tour, to include a stop at SXSW. United Crushers can be pre-ordered now with an instant download of ‘Lime Habit’ and ‘Wedding’ from iTunes and on CD and rose coloured LP from POLIÇA’s webstore with an exclusive “Blacklight” poster and T shirt. United Crushers tracklisting: Summer Please Lime Habit Someway Wedding Melting Block Top Coat Lately Fish Berlin Baby Sucks Kind Lose You POLIÇA 2016 EU Tour Dates 09 February – Point Éphémère, FR 11 February - Berlin, DE Berghain Kantine SOLD OUT 14 February – Bristol, BBC 6 Music Festival 15 February - London, UK Village Underground SOLD OUT