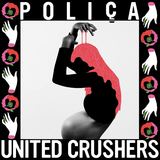 ARTIST: POLIÇA SINGLE: BABY SUCKS LABEL: MEMPHIS INDUSTRIES RELEASE DATE: 15 JULY 2016 Following the release of their acclaimed new album United Crushers this March on Memphis Industries Minneapolis’ Poliça are today announcing ‘Baby Sucks’ as the next single on 15 July 2016. They have also just announced a whole host of European festival dates including slots at British Summer Time Festival in London and the 6 Music stage at this year’s Latitude Festival. Pulsating from the start, Baby Sucks showcases the band’s signature percussion-heavy and soulful, electronic sound, whilst Channy’s vocals float effortlessly atop a bubbling groove. The track is something of a celebration of retaining Poliça’s identity and independence in the face of industry machinations. As Channy says: “Work with people, but do not be worked by people. It ends with horns that sing of celebration of a battle won and a new leaf turning over. I’ve fought hard to keep Poliça true to its intentions and a place where all of the people inside of it can grow and thrive and we’re gonna keep going strong.No more drama”. The track also arrives ahead of their biggest headline European tour to date, with the UK leg taking in Camden’s iconic Roundhouse on 19th October. This is sandwiched between concerts in Leeds, Glasgow, Bristol, Birmingham, Manchester and Brighton. Please see below for a full list of dates and venues. Out now on Memphis Industries, United Crushers - the follow-up to 2012’s Give You The Ghost and 2013’s Shulamith - is sonically their most complex and celebratory yet. Within, the four-piece expand the depth of the arrangements, the crispness of their sound and the vulnerability of delivery on their signature synth and percussion-heavy songs. Whilst thematically exploring areas that are both political and personal; touching on social injustice, self-doubt and isolation; urban decline and gentrification’ overcoming music industry machinations; coping with parenthood, and finding true and honest love in the wake of it all. Even at its darkest, the record is musically the band's most upbeat and celebratory. It is a weapon meant to empower the weak, the forgotten, and the disenfranchised. Poliça are: Channy Leaneagh, Drew Christopherson, Ben Ivascu, Chris Beirden and producer, Ryan Olson Praise for United Crushers... “excitingly upbeat electronica” - 4/5 Guardian “warmer, more expansive and uptempo...It all adds up to a record that bristles with mournfulness and melodious joy. Older, wiser, but far from jaded” - The Guardian “Pop that doesn’t shy away from enigma and darkness” - 4/5 - Evening Standard “‘United Crushers’ is here to debunk the notion that Poliça are doomed by their own experience with the simplest of tools – better songs”- 8/10 - Loud & Quiet “Poliça’s newfound love of pop and infectious dance, ‘United Crushers’ offers up a lesson in how to create something truly universal” - 4/5 - DIY “A more muscular sensibility for the American quartet” - 8/10 - Uncut “They’ve excelled themselves with the most intimate and empowering album of their career” - 4/5 - NME POLIÇA 2016 UK Tour Dates 02 July – London, UK, British Summer Time Festival 16 July - Suffolk, UK, Latitude Festival Oct 14: Leeds, UK – Stylus Oct 16: Glasgow, UK – SWG3 Oct 18: Bristol, UK – Anson Rooms Oct 19: London, UK – Roundhouse Oct 20: Birmingham, UK – Institute Library Oct 21: Manchester, UK – The Ritz Oct 23: Brighton, UK – Concorde 2