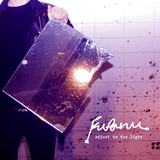 FUFANU ‘Adjust to the Light’ Brand New 12” Vinyl EP & DL released 29th June. (One Little Indian Cat. No. TPLP1308/ TPLP1308DL) 1. will we last 2. the hours 3. blinking 4. city lights (in the light of the night demo) “Disclosure attending Bela Lugosi's funeral.” Rolling Stone “Part cold-wave, part post-punk, it's ferocious live …. Their boldness and vast reserves of potential are what make them by far and away our favourite Icelandic act…” Dazed & Confused “A tantalising amalgamation of The Fall, Bauhaus and the weirder corners of Blur’s output.” Q Magazine “A post-punk stalk dominates songs like ‘Circus Life’ – more Joy Division than Jónsi – and the band flesh out to a discordant, almost industrial five-piece live.” NME “Strange, dark, discomforting and mesmerising in equal measure.” The Line of Best Fit “Gripping to watch… Kaktus is a star.” Evening Standard Fufanu follow up their Circus Life debut with an EP of brand new material. ‘Adjust to the Light’ is released as a 12” Vinyl and Digital Download via One Little Indian on Monday 29th June. Molten opener Will We Last - full of clangorous, metallic guitars and syncopated bass - fizzes with non-specific dread (“I've been deaf in the mornings/ Since a late night in June” it begins) and prefaces three more tracks of circumspect post-punk and glassy existential contemplation. The mood is pulled into softer focus by The Hours pulsing synth lines, before the stark isolation of City Lights draws a curtain over proceedings. By comparison, it is perhaps Blinking’s attitude of playfulness that most straightforwardly reflects the wit, boldness and confidence of the band right now. The band has announced a string of London shows in June the week they support Blur at Hyde Park: Monday 15th June London, Birthdays (headline) Tuesday 16th June London, Shacklewell Arms (support) Thursday 18th June London, Lexington (support) Friday 19th June London, The Finsbury (support) Saturday 20th June London, Hyde Park British Summer Time Festival (with Blur) In the space of one week last November Fufanu became the most talked about new band of Iceland Airwaves, made their UK live debut at JaJaJa Festival and supported Damon Albarn at the Albert Hall - winning the approval of Brian Eno into the bargain. January saw the band perform crushing sets at Eurosonic before a return to the UK supporting The Vaccines on their sold out nationwide tour during March/ April - also slipping in a memorable two-night stand with Bo Ningen at Hoxton Bar & Grill. Formerly operating as techno duo, Captain Fufanu, with the addition of live instrumentation – and the band name shortened to a more economical Fufanu (“the Captain was left behind at a rave in Cologne”) – the Icelandic group began working up a dark, metronomic take on 70s and 80s European music. The rolling, hypnotic, seven minutes of debut single ‘Circus Life’ - primed early adopters at Rolling Stone (‘Disclosure attending Bela Lugosi's funeral’), Line of Best Fit (‘…like a mythical Ouroboros’) and JaJaJa (‘mesmerising’). The band’s unusual origins go a long way to explaining how Fufanu have arrived at their exacting sound. Live, the mordant wit suggested by song titles like Plastic People and live opener Goodbye can shift into thrillingly cold malevolence, fronted by ‘slyph-like’ singer Kaktus Einarsson’s magnetic stage presence. "It is an entirely new band, even though it feels the same," considers Kaktus. "There was no certain moment when we realized that this was our sound. We just liked what we were doing and kept experimenting. From [Roskilde Festival 2013] onward, the idea of a new sound for us was born — although leaving techno was not the outcome we imagined. We started to write new music with more live instruments, but still kept on using all of our synths and drum machines. It all happened really naturally." Fufanu is: Kaktus Einarsson (vocals)/ Gulli Einarsson (guitar/programming). Watch the band perform NOW live for KEXP at Toppstöðin power station in Reykjavik. Fufanu.net