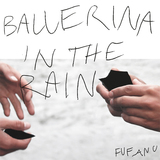 'Ballerina In The Rain'

F U F A N U •Ballerina In The Rain• b/w • Ballerina In The Rain [Damon Albarn Remix] • Northern Gannett [President Bongo Remix] New 3-track 12” single, 11th March 2016 [One Little Indian/ Cat. No. 1335 tp7dl ‘Thrillingly malevolent and catchy… Kaktus Einarsson has the perfect voice for this music: stark, imposing and omnipresent.’ ****The Guardian ‘Fufanu fully embrace their digital side – and make it chime with the bassy, rigid throb of classic post-punk… familiarity with Iceland’s best known musical exports (Björk, Sigur Rós) won't tell you a jot about the fizzing gothic blare of this debut.’ ****NME ‘A futuristic perspective on post-punk and rock’n’roll, Few More Days to Go completely surpasses expectation.’ 8.5 The Line of Best Fit ‘Just a taste of their true power.’ 9 (user rating) Drowned In Sound ‘Fractured midnight sun rock’n’roll.’ ****Mojo ‘Do you want to move closer to the band..?’ offers singer Kaktus Einarsson to the hesitant crowd. ‘…or do we have to move the equipment closer to you?’ It’s fair to say Fufanu are not your shy retiring types. Quite the opposite: where so much new pop music in 2016 aims to please, anxious not to be the odd man out, Fufanu are querulous and impulsive, concerned only with pleasing themselves. And their confidence is only growing: The last 10 months have seen them tour with The Vaccines, Bo Ningen, Blur and John Grant, developing an overwhelming iron fist of a live show, most recently demonstrated with a second round of pulverising Airwaves shows. (‘At Airwaves '14, Fufanu were an encouraging prospect — tonight, they were something much more enervating: a jackhammer-rock quartet of guitar, drums, electronics and the half-sung, rebel bark of Hrafnkell Kaktus Einarsson. He comes by his hectoring naturally - he is the son of Sugarcubes singer and Iceland punk icon Einar Örn. There is also a lot of young-Iggy promise in Kaktus' vocal charge and dancing spasms.’ Rolling Stone). Just before Christmas the Yeah Yeah Yeah’s Nick Zinner flew into Reykjavík for an intensive studio session with the band from which emerged a re-tooled version of Ballerina in the Rain, complete with backing vocals from Icelandic wonder dj. flugvél og geimskip and an accompanying remix from super-fan, Damon Albarn. The President Bongo (recently ex- of Gus Gus) remix of Northern Gannett completes the package – evoking nothing less than the sound of Sheffield, 1980. It will be released as a single on 11th March (the original versions of Ballerina in the Rain and Northern Gannett can be found on their Few More Days to Go debut album, out now). The band return for more UK shows this winter: Thursday 25 February Shipping Forecast Liverpool Friday 26 February Headrow House Leeds Sunday 28 February Nice ‘N’ Sleazys Glasgow Monday 29 February The Head of Steam Newcastle Upon Tyne Tuesday 01 March Sebright Arms London Formerly operating as techno/ electronic duo, Captain Fufanu (while Kaktus and Gulli were still in their teens), with the addition of live instrumentation – and the band name shortened to a more economical Fufanu (“the Captain was left behind at a rave in Cologne”) – the pair began working up a dark, metronomic take on 70s and 80s European music. If clangorous metallic guitars and floor shaking syncopated bass are key elements in the band’s powerful circumspect post-punk, then the live show with it’s MBV-like furnace blasts of volume is a game changer: The mordant wit suggested by song titles like Plastic People and live opener Goodbye can shift up into thrillingly cold malevolence, fronted by ‘slyph-like’ singer Kaktus Einarsson’s magnetic stage presence. Fufanu is: Kaktus Einarsson (vocals)/ Gulli Einarsson (guitar/programming).