TUNE Nayana IZ - How We Do 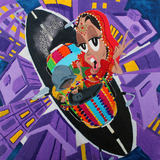 NAYANA IZ
releases debut single ‘how we do’

‘how we do' is NAYANA IZ’s debut single, which is available today on Different Recordings.

Produced by Karma Kid (Octavian, Dua Lipa), 'how we do' draws on Nayana’s success in doing things her own way when everyone around her made her goals seem impossible. Nayana - born in London, made in India - mixes the beauty of both worlds within her work. Growing up in an artistic family in North London and being naturally musical from a young age, she started off making jazz, pop, and indie music in a band (singing and playing keys), before stumbling across hip-hop and fusing it with the soul of India within the messages and instrumentation of her solo material. Nayana is currently learning Hindi as well as classical Indian singing and dancing for upcoming projects. Her goal is to empower young girls (particularly from her native land who do not have Indian role models); to inspire them to live their lives, find their authentic voice, and have a means of genuine self-expression.

First single 'how we do' is a suitable mission-statement for Nayana IZ, who already appears the sort of young talent firmly in charge of everything she does (and how she does it). Aged just 19, Nayana is also a member of NiNE8 Collective, the influential network of London-based creatives which includes Lava La Rue and Biig Piig. 'how we do' was launched today alongside a Schuh campaign starring Nayana IZ - which will be on bus stands all along Oxford Circus, as well as on billboards on the London Underground. Nayana has previously co-presented and appeared on radio shows such as NTS, Balamii, and Reprezent, as well as collaborating with the likes of Adidas, North Face, Redbull Music, Boiler Room, The Face and more.

Currently on tour with Ireland's hip-hop finest Kojaque, NAYANA IZ has recently played solo sets at the iconic Jazz Cafe for Annie Mac, supported Lil T Jay at Electric Ballroom and played at the 100 Club for Fred Perry - all before her first solo work, 'how we do'. Nayana IZ's debut EP will follow in 2020.