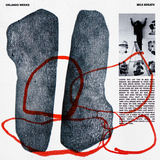 HIS DEBUT SOLO ALBUM ‘A QUICKENING’ FOLLOWS ON JUNE 12TH

“Somewhere between James Blake and Bon Iver. In fact, this gig shares traits with the latter’s stunning residency at the Hammersmith Apollo in 2018.’’ – NME, review of sold-out show at EartH

‘’Blue Nile-style, floats and shimmies its way into your heart.’’ – Sunday Times Culture

“While there are traces of Radiohead, Arthur Russell and Talk Talk in the blueprints, it mostly remains uncomparable.” - The Line of Best Fit

“This bold and brave new direction has certainly paid off, and we’re excited to see where it goes next.” – Gigwise

“The expertly sculpted return has a twilight poignancy.” - Clash


(dl new press shot here from Jackson Bowley)
Orlando Weeks’ first two solo singles, ‘Safe In Sound’ and ‘Blood Sugar’, have provided a fascinating insight into the life-changing journey of fatherhood that he documents in his upcoming debut album ‘A Quickening’. He’s already earned an A-list at BBC 6 Music and piqued the interest of a variety of publications, who have heralded the poignancy of its intimate narrative.

Weeks now builds towards the album’s June 12th release by sharing new single ‘Milk Breath’. The song is the opening chapter of an album that documents his time as a father-to-be. He’s a figure both vital to the story and yet also somewhat removed.


‘Milk Breath’ captures a tender moment in the early days of a father/son relationship, with Weeks gently singing “You’re a beginner, I’m a beginner too.” The song returns to the disarming and direct refrain, “My son, my son”, which hums like an incantation that is both assertive and unbelieving; “you’re so new I, still forget sometimes, that I’ve got you.”

As with many of the moments that Weeks tackles throughout the album, ‘Milk Breath’ explores an unusual dichotomy with unguarded beauty. It’s an ordinary moment in a young family’s life, but there’s a muted drama in domesticity.

“This is about watching my son sleep,” Weeks says. “When you’ve rocked him for 45 minutes and finally the wriggling has stopped and the muscles have relaxed and you put him down in slow motion and then stand, without breathing for another 20 minutes praying that he’s asleep.” In these moments, the singer says, “A cracked twig in the street below is like a slammed cutlery drawer. A car alarm half a mile away might as well be in the room with you. But your baby is asleep and at peace and slowly you are too.”

Sonically, ‘Milk Breath’ provides a flavour of what to expect from the album as a whole. Weeks’ voice shimmers as it expresses feelings of love, fear and wonder that are overwhelming but still delicate. Drums trip, woodwind and brass can be heard, piano lines run in and out, vocals layer and guitars are few and far between. This is not the indie rock and roll that some may have predicted. You might think of Talk Talk. You might think of Robert Wyatt. You might think of Radiohead or Bon Iver. You might think of the wonder of Kate Bush. You might think of Lambchop’s late career electronic turn, replacing in that case Kurt Wagner’s Nashville-inflected fragments with Orlando’s chiming and pure delivery, served up by way of South London.

The accompanying visualiser for Milk Breath was made by South Korean artist Myungsik Jang, and presents the first of a series of his interpretations of the printed shapes from the forthcoming album artwork.

‘A Quickening’ is available to pre-order and pre-save here. In addition to its digital and streaming releases, it will also be available on three physical formats: heavyweight vinyl, CD packaged with a poster, and a limited edition clear deluxe vinyl which will include a signed and hand-finished print. The deluxe vinyl will only be available via Orlando Weeks’ Music Glue store and in select UK independent record stores.

Weeks spent much of his young life as the frontman of Ivor Novello winning band The Maccabees, going on to become a children’s book author in the wake of the band’s disbanding. His first book, ‘The Gritterman’ (2017), came with an accompanying soundtrack and was described by the Financial Times as recalling “Raymond Briggs at his darkest.”

‘Milk Breath’
‘Blood Sugar’
‘Safe In Sound’
‘St. Thomas’’
‘Takes A Village’
‘Moon’s Opera’
‘All The Things’
‘Blame Or Love Or Nothing’
‘None Too Tough’
‘Summer Clothes’
‘Dream’