TUNE Hinds - New For You 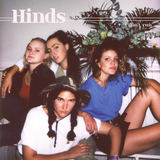 Today Spanish quartet Hinds - Carlotta Cosials, Ana Perrotte, Ade Martin and Amber Grimbergen - announce their long-awaited second record I Don’t Run. Out April 6 via Lucky Number, the new album shows a bigger, better, faster, funnier, more dexterous Hinds. Co-produced by the band and Gordon Raphael [The Strokes, Regina Spektor], and engineered by Shawn Everett [Alabama Shakes, Perfume Genius, The War On Drugs, John Legend], I Don’t Run is the product of a band fighting for their place, a band unwilling to rely upon their successes, a band who have just begun to prove themselves, and a band who plays hard but works even harder. Pre-order I Don’t Run HERE.
Hinds also announce tour dates today - this April they will bring I Don’t Run and their insanely fun live show across Europe. See below to find a show near you and get your tickets HERE.

Hinds’ breakout debut album Leave Me Alone may have been an album of party anthems drenched in metaphors, but with I Don’t Run, it’s time to cut right to the chase. Some might expect them to write songs about being happy, young and carefree – “but we're not satisfied with that,” explains guitarist and co-vocalist Ana Perrote. “On this album the struggles are clear. We want to be brave.” I Don’t Run is Hinds’ return with an honest reflection on a period that changed their lives beyond their wildest imaginations. Since 2014, the band has been on a globetrotting run. They’ve never professed to being error-free, and they're all the more brazen for it having survived everything that’s been thrown at them: world tours, sold-out crowds, harsh criticism, sexism, and all that lies in-between. Hinds have become better musicians, tighter friends and tougher characters.

To celebrate the announce, Hinds also share I Don’t Run’s first single, “New For You”, with a music video that sees the band dominate the fútbol field. It features guitarist and co-vocalist Cosials practically screaming “Sometimes I see myself and I can’t stand my show!” before a pining chorus that sees her promise to be her best self for a lover (or perhaps for herself, or even her band of sisters). Beneath the breezy melodies lies a damning self-criticism; a side to Hinds we haven’t seen. They may play as dangerously as any male DIY act, but their reactions to sudden notoriety are imbued with sensitivity; a result perhaps of their inherent femininity, as opposed to a need to push their egos.

After everything they’ve overcome, one might think a band like Hinds would have second album jitters, but think again. Hinds are chomping at the bit and with defiant confidence. “We loved making this album,” says Perrote. “We knew what we wanted and we have what we wanted. This is a new start for us and we're fucking ready.”