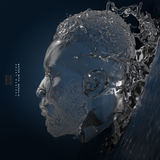 Following on from his explosive first single of 2018, the formidable IF ONLY, East London's KOJEY RADICAL teams up with rising British singer Mahalia and UK producer Swindle to deliver infectious new cut WATER.

Dialling up a softer side to the enigmatic UK rapper, WATER is a hazy, up-tempo offering which sees Kojey finesse his singing voice, peppered with Mahalia’s smooth, soulful throwback vocal toplined over a languid, rolling beat delivered by one of the most versatile producers of late; South London’s Swindle, exploring themes of angst, social oppression and societal privilege.

Speaking on the track Kojey quotes:

"I wrote Water to document the moments where ignorance no longer feels like bliss. I wanted the record to feel familiar, like having a conversation with a person you worry about because of the unpredictability of tomorrow. It's a song for the feelers as well as the listeners"

2018 so far has seen the one-to-watch rapper launch his own night in partnership with the Jazz Cafe; ‘Endless’ (04.04) centred around a night of live music and poetry featuring Ego Ella May, Mungon Cov, Bassette + Caleb Femi, a sold-out event which marked his position as a curator of live music, alongside his position as an acclaimed live artist. His busiest festival season to date, live dates include performances at The Great Escape (Vevo Stage), All Points East, Bestival, Applesap, Boomtown, Outlook and Womad.

Continuing to explore sensitive issues which resonate personally to him, Kojey partnered with Adidas and luxury fashion retailer SSENCE on a short film entitled ‘INFINITE SILENCE’, exploring struggles with mental health. The film has been nominated in 5 categories at this year’s Berlin Fashion Film Festival including Best Idea, Best Direction, Best Cinematography, Best Local Production, Best Film for Clothing, Footwear and Accessories. Kojey also features in the upcoming The Influence Project, a new photography exhibition celebrating the impact that leading black musicians have had on contemporary sound and culture which debuts at Somerset House, alongside esteemed names such as Anderson .Paak, Shuggie Otis, George Clinton and Candi Staton amongst others.

Noisey: 'East London's Kojey Radical is always pushing boundaries, whether they be emotional, aesthetic, or both. This has earned him a reputation as one of UK rap's most fearless voices, as well as one of its most imaginative artists’

MTV: 'Kojey proves once again that he is one of British rap's most exciting stars on this candid new cut’

Pigeons + Planes - 20 British Rappers to Listen to in 2018: 'Kojey Radical has a lot to say, and the confidence to say what he means. It’s a powerful combination'

Sunday Times Style Ones To Watch 2018: 'He’s the sort of rising star who does so many things we feel lazy just reading about him’

Independent Ones to Watch 2018: 'The British-Ghanian artist focuses his music on issues of race, class and self-identity; addressing them with as much careful' consideration and depth as Kendrick Lamar on his incendiary record DAMN’