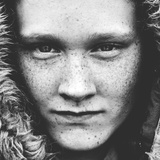 SOAK – ‘Blud’ (March 17) Live: CHVRCHES tour (NME Awards Show, Scala, February 17 / The Forum, March 14 + 15) "A vivid portrait of teenage deep-thinking: intricate, ambiguous psychodramas" Guardian 17-year-old Derry songwriter SOAK has announced plans for a new EP, ‘Blud’ (out March 17). This will form the first release on CHVRCHES’ brand new label, Goodbye Records, ahead of an NME Awards show with the band (Scala, February 17) and extensive European dates (including two sold-out dates at The Forum). SOAK, who has already been playlisted by the Radio 1 Introducing team, will also support the BBC-Sound-of-2014-shortlisted George Ezra in February: further details on the ‘Blud’ EP will be announced shortly. Born in Belfast but raised in Derry, SOAK offers vivid proof that age does not define artistic maturity. Bridie Monds-Watson has spent the last two years splitting time between her studies, the local skate-park, and her songwriting. There was significant acclaim for 2012’s ‘Sea Creatures’, which saw her offered slots at Glastonbury and Other Voices, support Tegan & Sara on tour, and complete a Biology GCSE moments after playing the City of Culture launch for Derry. A&Rs would fly over to Belfast for the day and sit patiently in her kitchen, whilst Bridie’s parents learnt on-the-job about artist management. Yet SOAK rushed into nothing, partly “because I never really expected any of this to go anywhere.” On ‘Blud’, however, SOAK accelerates her ascent from raw talent into a unique artistic voice. More atmospheric and textured than her earlier work, ‘Blud’ was written after overhearing an argument and explores the possibilities of change thereafter. The effect is curiously uplifting, seemingly as inspired by a childhood of Joni Mitchell albums as the brooding productions of Cat Power. A counterpart to her burgeoning songwriting, Bridie also played every instrument on ‘Blud’ herself (bar the bass), which was produced in Donegal by Mercury-nominated Villagers’ guitarist Tommy McLaughlin. SOAK has since teamed up with CHVRCHES for the release of ‘Blud’, who will follow 2013’s top-10 charting ‘The Bones of What You Believe’ with further signings to their own label, Goodbye Records. On working and touring with the Scottish trio, Bridie comments: “I’m a big fan of the band, their songs are brilliantly structured. I also like the fact that Lauren’s accent shows: she has a voice that you’d know anywhere, and CHVRCHES generally don’t sound like anybody else.” “If she represents anything at all”, the Guardian wrote in an early piece on SOAK, “it’s the potential of songwriting to show the complexity of a person’s inner life.” Bridie, meanwhile, compares her early career to “building a house in Minecraft.” Somewhere between the two is SOAK – a truly special new talent for the year ahead. 17 February NME Awards Show @ London, Scala w/ SOAK 19 February Dublin, Sugar Club w/ George Ezra 20 February Belfast, McHughes w/ George Ezra 2 March Birmingham, Hare & Hounds w/ George Ezra 3 March Bristol, Fleece w/ George Ezra 4 March London, Dingwalls w/ George Ezra 05 March Dublin, Academy w/ CHVRCHES 07 March Newcastle, Academy w/ CHVRCHES 08 March Glasgow, Barrowland w/ CHVRCHES 09 March Leeds, Metropolitan University w/ CHVRCHES 10 March Birmingham, Institute w/ CHVRCHES 12 March Cambridge, Junction w/ CHVRCHES 13 March Cardiff, University Great Hall w/ CHVRCHES 14 March London, Forum w/ CHVRCHES 15 March London, Forum w/ CHVRCHES