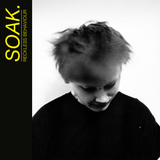 Album Name: Before We Forgot How To Dream
Album Rel Date: Out Now

Where From: Derry, Northern Ireland

SOAK has been shortlisted for 2015’s prestigious Mercury Prize at just 19, she’s the youngest solo female nominee in seven years. Debut album ‘Before We Forgot How To Dream’ has additionally seen Bridie Monds-Watson pick up recent nominations for the Q Awards (‘Best New Act’) and the Northern Irish Music Prize.

Currently undertaking an extensive European headline tour, SOAK plays a long-sold-out date London’s Union Chapel on October 27th – and has today confirmed details of her first headline show for 2016, with a date at Koko on March 22nd. Further live and single plans will follow shortly, follow this summer’s ‘B a noBody’.
'Before We Forgot How To Dream' is a record which traces SOAK's extraordinary journey in her career thus far, and also tackles those more timeless themes of friendship, family and what to do with your future. She started writing songs at the age of thirteen, before an early demo of ‘Sea Creatures’ – inspired by a friend who was being bullied - lit a fuse which saw A&R board the next flight to Derry. Yet SOAK rushed into nothing, continuing to find her confidence as an artist, and as a young woman. She came out unremarkably at 14 (and has since become a vocal champion of gay rights), got her first tattoo (of 20 and counting), and toured with the likes of Tegan & Sara or George Ezra between stints in the local skate-park - allowing her songwriting to grow up as she did.

Having signed a deal with Rough Trade the summer most of her friends got their A-Level results, SOAK was shortlisted for the BBC Sound of 2015 and released her debut, Top-20 charting album, ‘Before We Forgot How To Dream’, in May. In the wake of extensive critical acclaim, sold-out worldwide shows and a packed summer of festivals, it confirms SOAK ascent from raw young talent to a significant artistic voice for the years ahead.