TUNE Soak - Knock Me Off My Feet 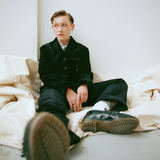 Where From: Derry, Northern Ireland

SOAK has today announced details of her much-anticipated second album, ‘Grim Town’, as well as unveiling new single ‘Knock Me Off My Feet’. Also featuring beautiful returning track ‘Everybody Loves You’, ‘Grim Town’ will be released on Rough Trade Records on April 26th, with a run of shows across the US, UK and Europe additionally confirmed as below. ‘Grim Town’ follows the success of SOAK’s multi-prize-winning debut album ‘Before We Forgot How To Dream’, and an extraordinary period of invention and self-discovery for the still-just-22-year-old Derry native.
The unique but universal world of ‘Grim Town’ is tantalisingly introduced today in new single ‘Knock Me Off My Feet’ - a love letter to the lawlessness and freedoms of small-town culture, as well as its more claustrophobic, cut-you-down-to-size qualities. It’s about the idea too, says Bridie, that “you can be the best person to yourself, and the worst person to yourself”, a theme which is explored intensely across SOAK’s ambitious, eclectic and brilliantly brave second album, ‘Grim Town’.

The central premise of ‘Grim Town’, says SOAK, is “a dystopia that I’ve created in my brain: me on the inside, processed into a pretend location. The way I could wrap my head around a lot of what I was going through was to make it feel like something quite physical and real. Once I had the idea of the album being an actual location, exploring the dynamics of this town and what it would look or sound like felt like the right way to give my mental state a personality.” So if debut album ‘Before We Forgot How To Dream’ was conceived as a time-capsule of innocence, vividly capturing those moments in adolescence when anything felt possible, ‘Grim Town’ perhaps examines the reality: on what happens next after you enter adulthood (but actually feel more in crisis than ever), and the world around you isn’t what was promised to you or your generation.

A record about getting lost that you can, also, truly get lost in, ‘Grim Town’ arrives as inspired by the audio-visual environmentalism of Pink Floyd’s ‘The Wall’ as the production of Arcade Fire, Broken Social Scene or Phoebe Bridgers. With unflinching honesty, Bridie tackles everything from long-distance love, depression, divorce and social anxiety to the changing modern landscape (sexually, politically, emotionally). And it’s accepting the jumble of emotions which make you ‘you’ that emerges as the ultimate message of ‘Grim Town’, with its suitably placeless universe in which everybody’s personal ‘Grim Town’ looks different, but everybody’s matters.