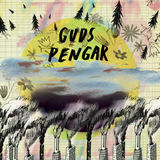 Rama Lama Records are proud to present 'Granar som flyr staden', the debut album from Swedish indie rock band Guds Pengar. The full-length will be released on May 15th both digitally as well as a limited pink vinyl and contains singles 'Borttappad', 'Bussen', 'Qute' and 'Radiobajs' Guds Pengar (Swedish for God's Money) have for the last year's been one of Malmö's best kept secret. With one self-released EP and ecstatic live shows the ever-changing constellation, with Evelina Nerstrand and Olof Stid as constant members, have build up somewhat of a cult status on the blooming Malmö DIY scene. Late 2019, the band finally took their first step out into the light with their first official releases that now culminate in their first record. 'Granar som flyr staden' (Swedish for 'Firs that flee the city') is an album that treats escapism from the modern city with pop songs. According to the band, the album title alludes on the city's complex interplay with the people in it and the world outside of it. The pollution, politics, anxiety, houses and streets that all look the same, the careers that we're supposed to chase, trends, the capitalist liver, need for constant stimulation, the crave for power and powerlessness that all lives in symbiosis in the city. The longing for finding other truths and other realities, the feeling of not existing in the right element or being at the right place like a fir tree in a big city. With a ground in classic Swedish punk and indie rock, Guds Pengar spices things up to a more exciting level with their mixture of the complex and straight-forward. Even though lyrics are all in Swedish their sonic power makes it hard to let go of Guds Pengar as soon as you've let them into your heart. The band formed out of a frustration caused by the music that surrounded them at the time, Guds Pengar wanted to do music that went straight to the feelings - turning restlessness into pop music. Guds Pengar are Evelina Nerstrand (Eveliina Pink), Olof Strid, Liam Amner (Hey Elbow) and Anton Jansson (Brigaden), but Bussen, Kväv mig, Gröt och Horisontens Land was recorded with Pontus Örnstrand and Patrik Schlegel instead of Jansson and Amner.