TUNE Kluster B - In Your Hometown 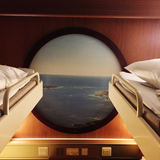 Kluster was founded by four friends and a virtual drummer in Malmö 2014, a real life drummer joined in shortly afterwards and the gang was complete. Since, the quintet has been active on as well the Malmö indie scene as playing shows in Berlin, Copenhagen, Stockholm, supporting acts such as Frankie Cosmos and Nicole Sabouné. Debut single Over My Head was released in February to praise from Line of Best Fit, Spotify's Fresh Finds and more. On April 24th, the success of the debut is followed by new single In Your Hometown and the announcement of debut album civic, out June 15th via Rama Lama Records.

In Your Hometown is yet another glimpse of Kluster's playful sound - a melting pot of broad influences such as pop, punk, noise, lo-fi, indie and jazz. According to the band, "In Your Hometown is somehow about paranoia; it's about a very scared man who hid in his hoody for all his life and never discovered the world around him. He was a great collector of thoughts and things but remained trapped in his own mind".

The members have a history as academic jazz players, forming Kluster after longing to find a collective process free from strict genre playbooks and narrow-minded academic rules. A process that resulted in Kluster's captivating characteristic dynamic and turning points, alternating from melodious to dissonance, complex to simple.

Debut album civic is out on June 15th via Stockholm indie label Rama Lama Records (Steve Buscemi's Dreamy Eyes, Delsbo Beach Club, Melby etc.) and is the labels first full-length release. The LP was recorded at Malmö's famous Tambourine Studios and is a elegant showcase of the quintet's exciting ability to blend experimental and accessible in their very own way. Or to put it in Kluster's own words, "civic is a look into the everyday ordinary, the changeable and the constant" with eleven songs treating "situations, emotions and people in our mind at the time, consciously or not".

Kluster consist of Linnea Hall (vocals), Pontus Örnstrand (keyboard), Sebastian Hegedüs (guitar), Adam Jonsson (guitar) and Andreas Pollak (drums) and are available for interviews and other requests. In Your Hometown is out April 24th on all platforms, debut album civic is out June 15th on all platforms and limited vinyl.