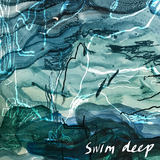 "”Swim Deep is a subterranean wonderland”" - The Line of Best Fit

Swedish indie pop quartet Steve Buscemi’s Dreamy Eyes are back with an excellent first taste of their upcoming debut EP ‘Four Waters’. New single ‘Swim Deep’ explores the idea of wanting to hide away from your own mistakes in life, deconstructing the feeling behind wanting to simply “disappear”. Effervescent, intriguing pop music, with a pure Swedish heart, on this new single the band meld indie pop, electronic rock, and dream pop - into one fluid hybrid.

Speaking on the release of the new single ‘Swim Deep’, the band said: "Swim Deep is about wanting to hide from your mistakes and all the embarrassing things you’ve done. It’s about wanting to disappear and not having to deal with life. But then realizing that you eventually have to face it all and stand for what you've said and done. There will always be people who do it better than you, but that doesn't matter because you will find your way and your people.”

Prior to forming via Twitter, all 4 members of Steve Buscemi’s Dream Eyes had been operating in different small Stockholm bands. It was in the summer of 2015 that Tilde Hansen (bass, vocals) tweeted out a request for fellow musicians to start a new band. A couple of months later, Steve Buscemi’s Dreamy Eyes were formed.

Behind the odd name — you’ll find one of the most promising new bands on the blooming Swedish indie scene. With all the band members still at the tender age of 22, they’ve already picked up an impressive amount of attention; from both Sweden’s biggest music sites, and influential international sources such as DIY, Billboard and Amazing Radio. Spotify also included the band’s 2016 dance-friendly indie pop single ‘Closer' in their Fresh Finds playlist which helped get the track into the top 10 on the Top 50 Viral in USA Spotify chart.

‘Four Waters’ — the band’s debut EP is a hugely striking and diverse 4-track release, one that’s set to propel the band to even greater heights. "Four Waters is about not being enough” the band explain. "The frustration of not being able to do more, or doing something you thought would be the right thing but turned out not to be. Questioning your purpose and meaning and trying to be secure with who you are. It’s about helping each other out when one of you can’t manage and about finding your own ways of dealing with things. Following your intuition and doing what you feel is the right thing to do.”

When we think of the songs on the EP we imagine ourselves standing by a dark lake somewhere deep in a forest in Sweden. We see the four songs as different types of water. Still, stormy, deep and obscure. Four different songs with the same wavy sound and feeling. It’s all about water and feeling blue.”