TUNE Roadhouse Records - YOU GO TO MY HEAD 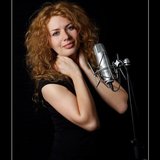 My friends have a number of different names for me, because in the former Soviet Union, were I was born and raised, there were so many variations for Masha: Marisha, Mania, Marusya, Mashunya, Maniasha, Mariya, Marichka and so on.

As I remember myself I was always singing and acting, so there was no question, whom I will become in the future. I was a 13 years old chorus singer, when USSR just simply disappeared and my home city, Kiev, became a capital of a new country – Ukraine. At that time there was only one decent theatrical school I wanted to study in – Kiev State Institute of Theatrical Arts, so at the age of 16 I went there and in 4 years graduated as an actress for Film and Theater. I was invited to work on TV right away and for a few years enjoyed hosting two TV shows “Yahad” and “Shalom, Kiev” on major Ukrainian channels.

Of course, there was a lot of theatrical stuff too. I was so happy to find myself on the same stage with my favorite actors at one of Kiev’s best theaters , “Drama and Comedy Theater on the Left Bank of Dniper River” working with the great directors and playing the lead roles in a few other theaters. There also were a few film and commercial projects with Dovegnko Studio,which ran at the same time.

In a few years, I went to Israel to study Judaism, got married, moved to Moscow and traveled back and forth between Ukraine, Russia, Israel and USA . My son, Levi, was born in 2002 in NYC and after our relocation to Moscow for 2 more years, we decided to move and stay in New York for a while.

There are lots of TV and radio stations in NYC, Broadway, of course, and a huge movie industry. Here I’ve tried myself as a news reporter for TV, radio co-host for a morning radio show, actress for theater and radio plays, dubbing actress, worked with Rosetta Stone on their Russian language software and with other well known companies such as Apple, Microsoft, Cablevision as a voice over or actress for their projects. Movies and theater are my major priorities.

For now I am freelancing with a few agencies for acting, voicing and modeling and looking forward for the new exciting creative opportunities, life has for me.