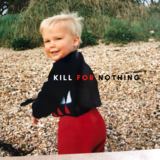 Hot on the tails of their first BBC Radio 1 play from Huw Stephens, Brighton feminist electro-punk trio CLT DRP are rapidly gaining pace, with their latest track ‘I Kill For Nothing’ out now alongside a remix from Yumi And The Weather.

Commenting on the new single, front woman Annie Dorrett says: "I Kill For Nothing is a self-reflective ballad about unraveling the parts of yourself that you hate and the consequences it has on the world and people around you."

The darkly atmospheric track shows yet another side to their highly experimental and diverse output, and is the latest to be taken from their debut album Without The Eyes released via Small Pond Records on 28th August 2020.

The jaggedly glittery, synth-heavy remix comes from Yumi And The Weather, a fellow Brighton act whose own eagerly-anticipated new material is set to be announced soon, following a Covid-related pause. "It was an honour to have been asked to remix CLT DRP's latest single as I was blown away after seeing them live for the first time, and that powerful energy stayed with me for ages”, says Ruby Taylor, whose music under the Yumi… moniker has gained heavy daytime and specialist support across BBC 6Music, Radio 1, Radio X and beyond. “I suppose that's where I went with this track, influence-wise, as I wanted to harness that motivating energy they gave me. I made a start by looping a section of the vocal stems I liked, and then did the same to a drum break I found, and went from there playing around with bass riffs over the top and once I found it, I played it on a few synths and built the song from there!"

Drawing influence from musically diverse acts ranging from The Prodigy, ho99o9, and Death Grips to Meshuggah, with a splash of Peaches thrown into the mix for good measure, CLT DRP’s following is as broad as their music. Wherever they play, audiences are blown away by the energy and intensity they bring to their live performances.

Previously-released singles ‘Speak To My’, ‘Where The Boys Are’, ‘Worth It’, ‘Like Father’ and ‘See Saw’ have received increasingly high profile support from Guitar World, London In Stereo, Bristol In Stereo, Fred Perry Subculture, DORK Magazine, Louder Than War, VISIONS, NARC., Come Play With Me, New Noise Magazine, Atwood Magazine, Digital Tour Bus and many more.

A chance pairing of perspectives in the haven for nurtured ideas that is Brighton has lent CLT DRP the right to scream freely since 2017. Somewhere between EDM inspired electro-punk and quasi-satirical female pop, their sound and message resonate beyond expectations wherever they are. Having met at University in Brighton in 2017, CLT DRP have already made a huge impact on the local scene while garnering interest across the rest of the country and further afield. Since their first release, ‘Merry Go Round’, the trio have honed their sound, growing in confidence with each step.