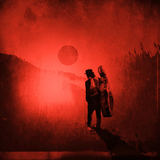 “Ajoyo” is the second radio single to be launched ahead of acclaimed London based cellist, multi-instrumentalist and composer/arranger Danny Keane’s forthcoming solo album. It follows the “Twenty Tonnes Of Tension” single which picked up heavy early support across Jazz FM, BBC Scotland, Worldwide FM and beyond.

“‘Ajoyo’ is a celebration. It lays bare the essential building blocks of music - melody and rhythm. It represents the human endeavour to discover these buildings blocks in pursuit of the most natural path of expression. In this case, a path of celebratory joy in which people can congregate”, says Danny Keane.

Mainly influenced by West African music, Ajoyo uses the melodic power of a full horn section soaring over a solid repetitive rhythmic foundation – in the percussion and, in this instance, the cello in the role of the bass. It shows off these elements in all their glory, coming together in a joyous musical jamboree.

Danny elaborates: “I particularly wanted to bring the cello into this musical setting, not only as a bass instrument, but also as a soloist, as the whole track blossomed from the bass line hook I originally conceived on the cello.”

Danny Keane’s long apprenticeship working with some of the world’s greatest artists – from Anoushka Shankar, Nitin Sawhney and Mulatu Astatke (who actually makes a guest appearance on Keane’s album), through to Bat For Lashes and Damon Albarn/Gorillaz – has given him a grounding from which to create his own musical vision.

Drawing on a rich and varied career, his new solo material is a thrilling coming together of a lifetime’s worth of ideas and influences. Bursting with flavours of jazz, Indian folk traditions, African rhythms, European classical, and contemporary dance music, Danny Keane traverses many genres and geographies pulling them all together into a unifying, dizzying whole.

In a sense, with his forthcoming LP, Danny has rewritten musical boundaries creating a soundscape all of his own. At the same time, he’s captured the diverse sounds of urban London right now – a sonic melting pot as visceral, challenging and celebratory as the city itself.

Jazz is at its core, but it’s much more than that. It’s an unfolding genre, a joyous hubbub of musical storytelling, a thousand human conversations at once crackling with the energy of a North African souk or Dalston’s Ridley Road market. It’s a confident, outward-looking, giant community of sound.

Indeed the social and community aspects of music have always deeply resonated with Danny. He grew up steeped in the Irish folk heritage tradition and feels keenly that music has to connect on a deeply human level; that it speaks to the reality of people’s lives.

Danny’s decades-long classical training has also given him a virtuosic technique. He has studied the rules intensely, so that he may break those rules intentionally. The result is an intelligent, magnificent, genre-defying musical mash-up that speaks to a higher common denominator, and yet, for all its rawness and complexity, remains wonderfully accessible, tender and human.