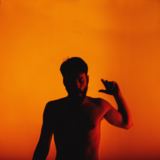 Multifaceted artist Dizraeli is set to release ‘Oi Oi’, the second single from his upcoming album, ‘The Unmaster’, on 12th April, ahead of the first full live band show in London at Redon on 17th May. This follows heavy early support for the recent “Madness” single including Tom Robinson (BBC 6Music), John Kennedy (Radio X), BBC Introducing and Amazing Radio.

Throughout the explosive three-minute song, Dizraeli tears apart influences as diverse as trap, noise music, and the wonky richness of Rihanna’s ‘Consideration’, taking us further into the unique musical world of the artist’s upcoming new album.

Building the track’s instruments himself, Dizraeli captured field recordings around London; the main marimba sound is a bollard played in the carpark of Tottenham Halfords, the drums are built from vocal noises and saucepans, while snatches of yells from school playgrounds and an anti-austerity protest are scattered around the track, ‘Oi Oi’ chaotic and fierce output is the perfect invocation of 2019 London.

Dizraeli’s songwriting process is close to spoken word artists such as Kate Tempest, both basing their work on the kinetic agitation of hip-hop. The Bristol born poet and MC’s fierce politicised narrative is often based on real life events, like in this single - a twisted love song to London - where the stabbing of a shopkeeper actually witnessed by the artist becomes the focus of his poignant delivery.

The striking visuals for the single, produced, directed and co-edited by Dizraeli himself, were born from a collaboration with choreographer-dancer Maeva Berthelot (Hofesh Shechter Company / Sadler’s Wells); creating a tense visual metaphor for the hook of the song “Can anybody please explain what the f**k is happening?”, the frenetic dance mirroring Dizraeli’s lyrical urgency, uncompromisingly rejecting the vacuous instagram-candy of the music video form.

Anticipation has been building steadily for ‘The Unmaster’, Dizraeli’s upcoming album, since he unveiled its first single ‘Madness’, which has seen support from the Likes of BBC 6’ Tom Robinson, Radio X’ John Kennedy, Subba-Cultcha, Amazing Radio, Worldwide FM, to name just a few. Recorded and completed over a period of two years, during which Dizraeli experienced a mental meltdown, and funded thanks to a successful Indiegogo crowdfunding campaign, it will be released in summer 2019.

Having composed the soundtrack for the E4 drama Tripped’, won the BBC Poetry Slam Championship, Dizraeli is known for his work with spoken word artists Kate Tempest and Scroobius Pip. His music has seen support from the likes of The Skinny, Evening Standard, Songlines and Pop Matters, with plays across all BBC Radio stations. He is also rising radio presenter, hosting his own monthly show on Soho Radio, and recently interviewing Mongolia’s hip-hop pioneers for a BBC World Service documentary.

‘Oi Oi’ confirms Dizraeli’s prowess as a serious artist, and with a new album coming out in the summer, live performances confirmed at Knockengorroch Festival in Scotland, London’s Woodburner, Boomtown Fair, Larmer Tree and Shambala over the summer, before a full live band tour in autumn 2019, the new release will establish him as one of the most interesting producers and songwriters of this generation.