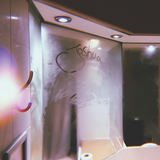 Joshua’s sense of musical storytelling hits you from the start. In the first few moments the solitary pulse of bass over beat crashes into a wall of synths, sweeping and arcing around each other like a celestial storm, then opens out to a steady, measured melody that brings a strong pop form to the mix. This is just the opening moment, but the guttural rhythms and emotional lyricism persist through all four songs on this self-titled debut EP.

Previously known best as an in-demand drummer with years of formative musical experiences to springboard off – from collaborating with Paul Weller as part of psych-rock Syd Arthur, playing in Bison Bonasus and sessioning for Jack Hues and Sam Brookes, to jamming out with Sean Lennon – Joshua (aka Josh Magill) now jumps into his songwriting shoes to spread his own message. He talks about change, loss, ambition, the harshness in life’s variety, and of pushing past it all.

There is a definite romanticism weaving through the often heavy subjects: two sides of the coin seen starkly in ‘Calais Dreaming’, a gutsy ballad speaking of the loss of a friend and the coming of a new life. ‘Radio Love’ is a brassy play at the music industry: “I wanted to shout out loud and clear that ‘I’m here!’”, explains Joshua. It is perhaps the freshness and optimism in his drive that gives this EP its extra shine.

Coming from a family of four musical brothers and writing songs since the age of twelve, Josh Magill joined two of his brothers, Joel and Liam Magill, alongside Raven Bush, in the psychedelic prog band Syd Arthur. Rising to attention in the UK with backing from Communion and the Radio 6 crew, in the States they flourished under the wing of Harvest Records and Sony Publishing. Currently on pause after album number three while various members explore other projects, the group toured much of the US and Europe and spent time on the road supporting big names like Jake Bugg, White Denim and Yes. Joshua recalls this time: “During the long journeys between gigs I decided to write songs and try to finish the idea before getting to the next venue. ‘Born in America’ came out of one of those drives. I based the song on the plight of homeless people and street dwellers, as we were coming into frequent contact with them; it was so sad and poignant and I had to write this song about it.”

For the EP, Joshua teamed up with his brother (and Syd Arthur bandmate) Joel Magill to expand on his original demos and ideas. Together they added bass and live drums and brought in collaborators Barney Pidgeon & Jamie Dams on guitar and vocals for key moments. What results is a weave of strong rhythms and layered vocals and synths that creates a rich fabric of groove-based pop, with a youthful honesty that carries right through the EP. You get flavours of Motown, soul and classic pop – as if MGMT and Kevin Parker teamed up to jam out Stevie Wonder’s Inner Visions. Joshua takes a breath, digs deep and aims his unique sound at the world.