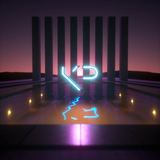 “Prey At Night”/“Blood Orange Beach” is a bold continuation in a series of double A-side single releases from Kayla Painter.

These two new tracks give yet another glimpse into this artist's rich interior landscape. The terrain may be familiar to those who have witnessed her show-stopping AV performance. However, this release adds another dimension of darkness, shadows and unease to the Kayla Painter world.

“Prey at Night” explores an alternative future through Painter’s lens. Drawing on horror cinema aesthetics (Climax, Neon Demon, Raw) she creates overbearing tension whilst leading the listener deeper into the darkness of the track.

“Blood Orange Beach” follows with aesthetic influences of a reimagined future from the late 80s, using influences from Detroit techno, while maintaining a dark edge coupled with the light relief of airy synths.

Depending on where you land in Kayla Painter’s universe, the outlook could be very different. From one angle, she sculpts subversive rhythm tracks that play on club tropes while crackling with an energy sourced from somewhere far away. Earlier work left listeners enshrouded in her beatless, textural studies. Often she strikes in between these extremes, using micro-sampling and musique concrete principles to propel her unique clusters of deftly sculpted sound design.

Having grown up a multi-instrumentalist, and playing in more conventional bands at university, Painter’s personal journey led her deeper into electronic music production and academic reflections on our relationship with what we hear. She is a passionate advocate for the creative potential in field recording; her compositions bristle with self-sourced timbres captured in an enduring spirit of experimentation. She also uses her platform to explore specific themes both personal and external: 2018’s Cannibals At Sea grappled with her mixed Fijian-British heritage, juxtaposing Pacific islander beliefs with British working class values in a compelling exploration of her own identity and the wider world around her.

Painter’s immersive, ever-evolving AV performances (see link to a recent performance below) are a natural consequence of the entire writing process – the visuals figure into the earliest stages of her music; 2019 saw her playing at events such as The Great Escape, Camp Elsewhere, Bluedot, and the inaugural edition of Gilles Peterson’s We Out Here festival.

As well as being championed by Gilles Peterson, Kayla Painter’s previous solo releases have gained radio support from the likes of Mary Anne Hobbs, Nemone, Tom Ravenscroft, Huw Stephens, Late Junction, and BBC Introducing. She has also crafted remixes for a string of well-regarded acts and labels including W.H. Lung (Melodic Records), Zoon Van Snook (Lo recordings) and Scrimshire (Alberts Favourites), as well as appearing on releases by the likes of Jilk (Project Mooncircle), among others.
“Prey At Night”/“Blood Orange Beach” is the next step, and will be followed by further compelling Kayla Painter releases throughout 2020.