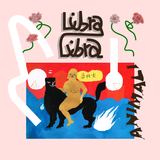 Please meet Beth Cannon’s new weird and wonderful project, LibraLibra. Cannon has just returned from touring with Simon Raymonde’s new venture, Lost Horizons (Bella Union), where they have played Iceland Airwaves, Le Guess Who festival and toured the UK off the back of their debut album ‘Ojala’. Having written and performed the Lost Horizons album’s lead track ‘Bones’, to major acclaim, Cannon is now ready to unleash her own project on our tender earholes with the release of the first LibraLibra single ‘Animali’ in March.

This track will be the first in a set of unique and fearless singles that will be coming at you over the next year, with the debut album due to land in 2019.

LibraLibra are the combined force of vocalist Beth Cannon and multi-instrumentalist/ producer, Joe Caple. Exotic melodies and frenetic, lyrical flows meet tribal beats and broken guitars. There is an unease in every song that leaves you hanging on to Cannon’s every inflection; each new chorus cementing the craft of these talented composers.

Cannon’s vocal ability has received deserved accolade throughout her career with her command of script prompting comparisons to Kate Bush and Bjork. This project combines a melodic mastery akin to Asha Bhosle, with a lyrical flow that would leave MIA burned. Caple’s mastery of rhythm transcends simple percussion, as hand claps and beats communicate with a dark soundscape of synth and guitars.
On LibraLibra’s debut track and the launch of this project, Cannon has this to say:

“‘Animali’ Is an unapologetic war song in which I am ready to fight for equality. Since I can remember equality has been at most fleeting, if never fully achieved. There have always been opinions thrust upon me, am I too fat, too thin, a slut, a prude, too clever, why am I not settled down?… I have learnt to play roles to suit those around me, to make sure I don’t offend, that I stay in my place and for years I have repressed the anger, the hurt, the constant conflict that this causes. I’ve become an actor playing parts in my own life. I feel a shift in society right now, people’s eyes are opening and, now, more than ever, I feel a sense of community that we are ready to fight, ready to admit that the way we are perceived and treated can’t be our reality anymore.”

Fans of Death Grips, The Knife and tUnE-yArDs will find themselves in exciting new territory with LibraLibra.

‘Animali’ will be LibraLibra’s debut single and will be available across all streaming platforms from 2nd March. Mixed and arranged by Ben Hampson and mastered by John Davis at Metropolis.