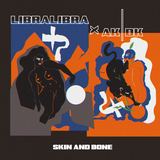 LibraLibra are four renegades from Brighton, UK, who when combined are a force to be reckoned with. Exotic melodies and frenetic, lyrical flows meet tribal beats and broken guitars. There is an unease in each song that leaves you hanging on to vocalist Beth Cannon’s every inflection; each new chorus cementing the ambition and talent of this intriguing bunch. In a meeting of minds, their latest single features a new rework by renowned noise-makers AK/DK.

Early support for this single includes airplay from Amazing Radio, and John Kennedy (Radio X) who has dropped both the original “Skin And Bone” and the remix, crowning the latter his X-Posure Hot One.

AK/DK elaborate on their remix, and the appeal of LibraLibra: "LibraLibra are such an intriguing band, we've been keeping an eye on them since they started. Such a great blend of songs, noise and identity. With this track it was Beth's incredible vocals that drew us to it - that and the pounding drums! We knew that awesome chorus was going to work super sweet with our dirty synths and we wanted to give it an epic, motorik, club-like feel. So happy to be working with them!"

Beth Cannon’s vocal ability has received deserved accolade throughout her career with her command of script prompting comparisons to Kate Bush and Björk. Some may recognise her voice from Simon Raymonde’s Lost Horizons (Bella Union), where Cannon wrote and performed on lead track ‘Bones’ and fronted the band throughout a summer of festivals including Green Man, End of the Road, Seachange, Kendal Calling, Bluedot and many more.

While her powerful presence is unmistakable in everything she does, LibraLibra is a different beast and really showcases the direction Cannon is heading in, which is ultimately a more dark and twisted path.

‘Skin and Bone’ and ‘Lilith’ build on LibraLibra’s first two singles ‘Animali’ and ‘Tongues’ which gained heavy support including Stuart Maconie (BBC 6Music), BBC Introducing, The 405, Les InRocks and Get In Her Ears. The palpable early buzz for this band has been further stoked by live appearances at Liverpool Sound City, the Great Escape, Bad Pond festival, and London support for ILL and Swedish Death Candy; plus shows at the Boileroom, MK Gallery, an immersive and very strange launch show in Brighton, and a headline gig at the Shacklewell Arms in London. Later in the year, the band will be supporting Psychic TV at Heaven, as well playing the buzzy Off the Record festival in Manchester, and collaborating with acclaimed multi-media artist Rachel Maclean for a special commission at Zabludowicz Collection, a highly respected gallery in London.

LibraLibra combines a melodic mastery akin to Asha Bhosle and the range of Mike Patton, with a lyrical flow that would leave MIA burned. The band’s mastery of their instruments creates a unique cacophony of beautiful noise whilst never detracting from the catchy melodies and infectious beats that smack you right in the holes.

About Skin and Bone, Cannon says this: ‘One of the first songs we ever wrote - Joe [Caple – drummer & producer] and I went to my home village and wrote in the church next door for a week. I think a lot of shit came up that week naturally from the past - the years of being restricted and stifled creatively at a repressive girls school and small town life. I think this song really harps back to that. If you listen closely you can hear myself and Joe screaming and chucking toys around the church - it just felt good to let loose.’

And of Lilith: ‘This officially brought me and Joe together - it was the first song we wrote. Lilith, for me, is too personal to explain - but she makes me want to scream - it’s a way of letting out my pain and doing this live is my therapy.’

Fans of Death Grips, The Knife and tUnE-yArDs will find themselves in exciting new territory with LibraLibra.