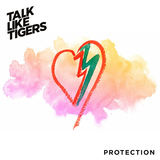 Newcastle duo Charlotte and Stephanie Walker, aka Talk Like Tigers, return with the release of their new single “Protection”. A mesmerising cocoon of 80s infusion, “Protection” is filled with eager yearning vibes and is out 7 May 2020 via Neon North Records.

Reminiscent of Tears for Fears with a twist of Sky Ferreira, “Protection” is infused with 80s cool and punchy bass, layered with poignant lyrics and soaring velvet harmonies – Talk Like Tigers have created a song that is both delicate and dance-worthy.

With its upbeat sound juxtaposed with emotional lyrics, “Protection” expresses emotional frustration while being filled with hope and determination to help and protect the person you love. Talking about the single, Charlotte elaborates: “Protection is a deeply personal song which we wrote about two people very close to us losing family members. They were lost in grief and we wanted to protect them and relight their internal flame and reopen their hearts to the beauty of the world.”

Live highlights for the rising evocative synth-pop siblings include Glastonbury Festival and the iconic Sage Gateshead, who have dubbed the band as “one of the North East’s most exciting alt-pop bands”. After spotting Talk Like Tigers performing at the Sage as part of the Great Exhibition of the North, BBC Radio 6 Music’s Tom Robinson premiered their debut single, “Fruit”, on his influential emerging artist show. Talk Like Tigers have also gained airplay on BBC Radio 1 from Huw Stephens and championed by BBC Introducing in the North East.

Talk Like Tigers are twin sisters, Charlotte and Stephanie, whose vocals and seamless, velvet harmonies have been recorded by Sony and have taken them around the world as professional touring musicians – travels which have influenced and inspired their own music and songwriting. Their sound is a dreamy alternative pop in which inventive lyrics paint vivid images, and their powerful vocals weave together to create a visceral other worldliness. Mixing acoustic instruments with synths, their soundscapes are glittered with quirky rhythms and infectious hooks.

When performing live, Talk Like Tigers seamlessly switch between synths, guitar, drum pads and vocal effects to create a deep, enveloping sound. Talk Like Tigers are set to play Standon Calling Festival 2020 and September will see the band venture on a support tour playing venues including Shepherds Bush Empire. More releases will follow Protection. It’s going to be a busy 2020 for Talk Like Tigers.