Back to Sadie Jemmett's Music <
Album 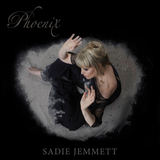 I have been receiving some great press and a little radio play from my new album, Phoenix, I would love it if you could feature Phoenix sometime, please take a listen and let me know if you require anything else. Thank you. Here is the latest press release for the backtstory. You have played my music in the past! Thank you, Sadie x June 2019 – for immediate release Sadie Jemmett releases politically-charged new album ‘Phoenix’ UK singer-songwriter Sadie Jemmett returns with her brand new album ‘Phoenix’ following the success of the single ‘Don’t Silence Me’, which was picked up by the #Metoo movement as an anthem It’s been a busy year for critically acclaimed musician and songwriter Sadie Jemmett. In March she released her politically charged song ‘Don’t Silence Me’ in support of her friend, Hollywood actress, Mhairi Morrison, a victim of a sexual assault by a French film director. The powerful video was picked-up by the #metoo movement, received international press coverage, as well as 136k views on social media, and has been ‘dubbed an anthem for our age’. Sadie now releases her new album ‘Phoenix’ on TwoUpTwoDown Records/Absolute Universal. The album, with its wide range of subject matters and topics, showcases Sadie’s dexterity as a musician and a lyricist. She sensitively touches on ideas of love, loss, and remembrance whilst approaching the more political numbers on the track list with a sense of confident defiance. The album also gives Sadie the opportunity to display her true vocal talents and an impressive delivery that enhances her reputation as not only a great songwriter but a great singer too. Phoenix was recorded at Baker Studios on Vancouver Island with producer Joby Baker, of Cowboy Junkies fame. The studio has a first-class reputation because of its analogue set-up and the album’s production quality is a reminder of classic soul and blues records on iconic labels such as Stax or Chess. Beginning with ‘Rescue Street’, a beautifully introspective track that examines the realities of internet dating, the album soon intensifies with the heartbreakingly relatable ‘Bitter’, a classic heartache track with a tender sentiment. From here we move to the empowering anthem of the #MeToo movement ‘Don’t Silence Me’, before we hear the beautifully intimate love song ‘A Fighting Chance’. ‘The Wilder Shores of Love’ focuses on the current refugee crisis, with a heart-rendering story of one man’s plight as he travels across Europe in search of his family. Sadie changes gear to sing the upbeat and catchy ‘Passport’, the tender exploration of grief, ‘Leonards Waltz’, before ending with the politically aware track ‘What You Give Will Come Back’, a simple song about giving in an age of extreme capitalism and consumerism. “What I like about ‘Phoenix’ is that I can see my development as a songwriter. With my previous albums I wrote from quite an introspective and confessional place, but most of the songs on Phoenix are written through observation and trying to reflect what is happening in the world today. At the same time, it is important to me that people listening to the album can interpret these songs from their own personal perspective,” said Sadie. Her busy schedule for 2019 continues with a tour of the UK, Europe and Canada later in the year. In the past Sadie has also worked with acclaimed theatre director Irina Brook and has now been commissioned to write music for Brecht’s epic play Mother Courage, which will be performed at the National Theatre in Uruguay in September. ENDS Editors note: album releases Friday June 21 on all major digital music channels. // Links: www.sadiejemmett.com Twitter: https://twitter.com/sadiejemmett Facebook: https://www.facebook.com/sadiejemmettofficial/ Instagram: https://www.instagram.com/sadiejemmett/ // For hi-res downloadable images please go to https://www.sadiejemmett.com/epk/ // For more information or to request an interview contact cat@fifthelement.biz or tony.myers@quicksmartmedia.com