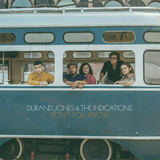 Durand Jones & The Indications share brand new single ‘Don’t You Know’ impacting on 18th January 2019 via Dead Oceans. The new single is taken from forthcoming album ‘American Love Call', a fierce album which reckons with how to balance love and fury of modern day America, due 1st March. Hailed by NPR’s All Things Considered as “old-school soul with a new-school honesty,” the band conjure the dynamism of Jackie Wilson, Curtis Mayfield, AND The Impressions. This young band of twenty-somethings are students of soul.

Helmed by foil vocalists Jones and Frazer, and rounded out by Blake Rhein (guitarist), Kyle Houpt (bassist), and Steve Okonski (keyboard), The Indications released their self-titled debut album to much acclaim on renowned soul label, Colemine Records. The album quickly picked up steam on the back of the band’s booming live show. The group’s second album, American Love Call, is an album made the way the Indications dreamed it’d sound, a sprawling and limitless equation; grand and cinematic, yet focused on fleeting details.

Recorded at Brooklyn’s Studio G earlier this summer, American Love Call is an expansion of the band’s sound, making a leap forward in both style and songwriting. Pulling influence from a variety of sounds like R&B, gospel, early folk rock, and classical music, the Indications’ second album has a newfound confidence, with Jones’ bellowing voice and Frazer’s soothing falsetto filled out by backing vocals and instrumentation. Thematically, the album covers tough ground, like the danger of simplifying and romanticising the past, but it also attempts to reconcile, searching for unifying commonalities. Brooding, bold, and pensive, American Love Call is the result of the band fleshing out its crab and elevating its dreamy, old-soul sound.