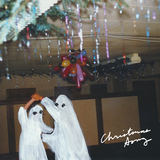 "McCarthy Trenching is singer-songwriter Dan McCarthy’s band. We played a show together in Omaha this last year. They named the band after the trenching company owned by Dan’s uncle so they could sell those t-shirts instead of having to make their own. The first time I heard this song it hit me like a ton of bricks. A lot of McCarthy Trenching songs do that. It’s not that often that I hear a Christmas song that doesn’t make me want to quit music. I played a show in L.A. around the holidays last year where I covered it for the first time. Jackson Browne was there, and he came up to me after the show to tell me how much he loved the song. A couple days later, Dan got a Bandcamp notification on his desktop computer that someone paid 50 bucks for his record and wrote a nice note and signed it Jackson Browne. He thought someone was fucking with him. So when I decided to record a version of the song, I knew who I wanted to sing on it. Plus, I have wanted to make music with Jackson as long as I’ve wanted to make music.”

Bridgers is currently on a co-headline tour with Julien Baker -- with Lucy Dacus opening -- and performs with her band next tonight in San Diego, CA, before wrapping up tomorrow night with a hometown Los Angeles show at The Wiltern.

The tour caps off an incredible 2018 for the young songwriter, which saw her spending the majority of the year selling out shows throughout North America, Europe, and the UK; making her morning and late night TV debuts on CBS This Morning and Conan, respectively; landing on the cover of The FADER’s Fall Fashion issue; winning the AIM Award for International Breakthrough Of The Year; releasing a deluxe digital reissue of her 2017 debut album, Stranger In The Alps; and performing on Late Night with Seth Meyers alongside Baker and Dacus as their trio, boygenius, among other feats. Stranger In The Alps was among the most-heralded releases last year, earning spots on year-end lists including The FADER (‘#1 Best New Artist of 2017’), Noisey, Bandcamp, and Uproxx, in addition to catching praise from Pitchfork, NPR Music, Billboard, Vulture, Stereogum, The A.V. Club, NY Mag’s Vulture, and W Magazine, among many others.