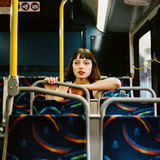 Stella Donnelly announces the release of her electrifying debut album, Beware of the Dogs, out March 8th via Secretly Canadian. Today, Donnelly shares the video for lead single and biting album opener, Old Man (impacting 8th March), in which she targets the song's titular creep, "Oh are you scared of me old man or are you scared of what I’ll do? You grabbed me with an open hand. The world is grabbing back at you." When something needs to be said, whether it's to an abusive man, a terrible boss, or a clueless significant other, the 26-year old Fremantle, Western Australian-based musician is fearless in telling it like it is. Delivered entirely with a sarcastic wink and a full heart, Beware of the Dogs proves across 13 life-affirming songs the power in sticking up for yourself, your friends, and what's right.


Watch the video for Stella Donnelly’s Old Man here
Donnelly boldly introduced herself to US audiences in late 2017 with the release of the song Boys Will Be Boys, which she wrote in 2016 about victim-blaming of survivors of sexual assault. She followed it up with a re-release of her debut Thrush Metal EP via Secretly Canadian, and a stunning run at last year’s SXSW. The six-song effort featuring just Donnelly’s voice and guitar was a perfect first taste of her ever-present humor and gutsy songwriting.

Since 2017, Donnelly has spent much of her time on tour. She returned home during one of Western Australia’s chilly winters in June 2018 to finally record her debut full-length. To flesh out the album, she recruited a full band of her best friends -- bassist Jennifer Aslett, drummer Talya Valenti, and guitarist George Foster – and worked alongside producer Dean Tuza who helped the songs branch out in adventurous ways without losing any of the intimacy and warmth of her EP.

Beware of the Dogs is a portrait of Donnelly taking charge. It showcases an artist totally in command of her voice, able to wield her inviting charm and razor-sharp wit into authentically raw songs. She says, “this album made me feel like I was back in the driver's seat. It was really liberating and grounding to realize that no one can f**k with this except me.”

Beware of the Dogs Tracklist:

6. Boys Will Be Boys

“At just under three minutes, [‘Mechanical Bull’] is over in a flash. But the impact isn’t lost; when you’re as sharp a lyricist as Donnelly, even a brief offering can pack a punch.” — Pitchfork

“Stella Donnelly is a feminist folk hero on the rise” FACT

“Honest, audacious and undaunted” The Line of Best Fit

“Hilarious. Important. Ace. There are many words to describe Stella Donnelly, whose honest and captivating tales make her the sort of voice that’ll emerge to lead something huge in 2019. Not just a marvellous songwriter, but a defiant voice needed right now” DORK