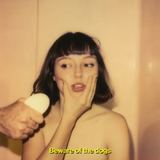 Australian singer/songwriter Stella Donnelly shares a new single, Tricks off of her debut album Beware of the Dogs, released on March 8th via Secretly Canadian to critical acclaim, with early support from The Guardian, Pitchfork, Clash and Rolling Stone amongst others. Following previously released songs, Lunch and Old Man, Tricks is a deceptively catchy jab at racist Australian pride and the absurdity of the music industry. The accompanying video was directed by Nick McKk and fellow Australian musician Julia Jacklin and shot in Melbourne. “This song is a playful zoom-in on the ‘Australian Identity’ and a loose dig at the morons that used to yell sh*t at me when I played cover gigs on Sunday afternoons. It probably served me right for singing ‘Wonderwall’ every weekend.”

Donnelly’s charisma shines on Beware of the Dogs as she explores her career, her country, her family, and her relationships with a razor-sharp wit and emotional authenticity.