TUNE THE PORTRAITS - Except For Me (single) 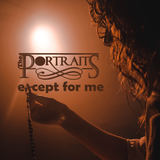 Lorraine: “Like many young Irish men, my dad came to work in England in the 1960s doing manual engineering-type labour. As a result of a contact he made while working in Tamworth, he was invited to come and work in Algeria for a year and a half, which was the experience of a lifetime for a young man who had rarely left his home town of Swinford in Mayo during his first eighteen years. As part of the application process, Dad needed to get himself his first ever passport, and for that application, required a copy of his birth certificate. When this arrived, he discovered that his real birth date was not in the month of October – the date he had celebrated his whole life – but actually in May. This led, after some digging, to the discovery that his birthdate had been falsified and that he had actually been born to an unmarried mother in a ‘Mothers and Babies’ home run by a Catholic order. In 1941, it was probably the greatest taboo for a young woman in Ireland to have a baby out of wedlock. Those who discovered they were pregnant were whisked away, everything hushed up and a story invented to explain their absence from the community. Girls were routinely sent to homes run by nuns, as have been documented in films like ‘The Magdalene Sisters’ and ‘Philomena’. And in real life, the recent discovery in the town of Tuam, just a few miles from where I grew up, of a septic tank attached to one such home containing the remains of 800 dead foetuses, babies and infants, rocked Ireland to its core. It is said that abuse and neglect within the homes, and on the part of the sisters running them, led to the deaths of all these poor youngsters with their whole lives ahead of them. A lucky minority survived into later childhood and some were adopted by childless couples, many in North America. But as is becoming painfully clear today, surviving being born in such a home and going on to live a normal life with your birth mother and father was a rarity in the extreme. This was the outcome for my dad, whose father was an honourable man and returned from work in England to marry my grandmother, the girl who’d given birth to his child. This is probably the most personal song we have ever written, not least because today I realise just how lucky I am to be alive at all.”