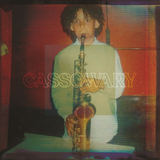 Cassowary, the moniker of the 25-year-old artist and multi-instrumentalist Miles Shannon, is the sound of contemporary Los Angeles, a sun-baked collision of the local flavors making the world cooler and stranger. This melting pot of influences is evident on “She Funked Me”, a twisted post-disco haze and the 24-year-old multi-instrumentalist’s Fat Possum debut out released 24th April via Fat Possum. On his self-titled debut, Cassowary evokes everything from the loping electronics of the Low-End Theory "beat scene" to the freewheeling chops of the jazz-fusion resurgence, from the murky textures of Odd Future's genre-hopping basement rap to the vintage funk revisionism of labels like Stones Throw. It’s an artistic statement that's as beautiful and strange as the flightless bird that shares its name. Textures move between twisted post-disco haze (‘She Funked Me’), blunted soul ballads (‘Price Went Up’), Glass-inspired minimalist fusion (‘Moth’), and head-boggling polyrhythmic jazz experiments (‘Roach’). "We're actually using a 15 over 3-time signature," says Shannon of the lurching ‘Roach’. "It's, to date, our hardest tune. Whenever we get a new instrumentalist, we teach them that one first. It's never easy." Shannon’s recording debut was nothing short of playing the piano on childhood friend Earl Sweatshirt's landmark 2015 album I Don't Like Shit, I Don't Go Outside, and the two spent hours bumping austere, lyrical rappers like Mobb Deep, MF Doom, Talib Kweli and Juelz Santana, with the video for his breakthrough 2010 video ‘Earl’ being partially filmed in Shannon's home. After graduating in 2012, Shannon opted not to attend any of the esteemed music colleges that had accepted him, instead moving to New York to hit the club circuit. Embedded in New York's local jazz scene for a few months, he promptly grew frustrated by its competitive one-upmanship and its focus on half-century-old standards. Instead, Shannon retreated to the places he was crashing at and played the guitar. He was getting into the hypnotic rhythms of composers like Steve Reich and Philip Glass, as well as the classic rock canon he had once shunned – bands like the Beatles, the Who and Pink Floyd. He returned to California with a new vision, an armload of new compositions and a dream. That dream is fulfilled on Cassowary, an unclassifiable 38 minutes that seamlessly weaves through jazz, R&B, hip-hop, funk, minimalism, avant-garde electronic music and more. "I really wanted to make a record that I would listen to," Shannon says. "I want people to listen like a musician, with that intent. It's clearly not just a pop album with pop songs. I wanted to challenge people, sonically. I want people to go in there and be surprised."