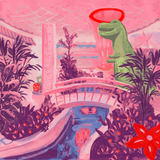 South East London’s Jerkcurb (aka Jacob Read) has today shared the stunning single ‘Voodoo Saloon’ - the sprawling track from his acclaimed debut record ‘Air Con Eden’. Air Con Eden is out now on Handsome Dad Records and is available in all formats HERE and includes previous singles ‘Timelapse Tulip’ and ‘Night On Earth’ amongst its 12 phenomenal tracks.

Off the back of a sold-out headline show at Chat’s Palace and tour supporting former Maccabees frontman Orlando Weeks, Jerkcurb has announced a new headline London show at Bussey Building on 12th March.

“The average British person will spend 8,760 hours in a pub during their lifetime.

I had the opportunity to have a Bar Mitzvah when I was 13 years old, but I turned it down. I never became a man. There are lots of things in my life that I wish I had confronted. Confronted because of a momentary sense of discomfort, fear of stepping a foot out of the ‘zone’. Comfort is a dangerous thing. There’s a familiarity and routine about going to the pub, it offers a momentary form of escape from the things your suppose to do. There’s comfort in it, but there’s also excuse."

And what exactly is the Voodoo Saloon? Jerkcurb offers:

"I’m very interested in theme parks, shopping centres, airports. These kinds of non-places, purgatory environments, and how they are this Americanised bastardisation of cultures and ideas, cut and pasted together. The Voodoo Saloon is like a theme park version of Wetherspoons, a juxtaposition of cultures and ideas, making little sense, fermenting eternally in purgatory."

Jerkcurb received airplay across national radio in the run-up to the album’s release courtesy of Radio 1, 6 Music, Beats 1 and Radio X, whilst Air Con Eden was lauded by the likes of DIY, Dork, CLASH, London In Stereo, Loud And Quiet, Paste, The 405 & The Line Of Best Fit. Read was recently the subject of two expansive long-form profiles with Dazed who said “Jerkcurb’s songwriting evokes a surreal Americana that never existed,” and The Line Of Best Fit who called the album “an escapist’s paradise”. The full profiles are now online HERE and HERE.