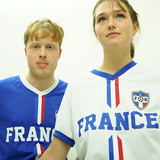 Ascendent London alternative pop band Jockstrap have announced a fully reworked version of their critically acclaimed 2018 debut mini-album Love Is the Key to the City - which was lauded by the likes of The Guardian, The FADER, Loud And Quiet, Dazed, Noisey and DIY.

The newly reimagined versions of mini-album tracks ‘I Want Another Affair’ (premiering today via Wonderland), ‘Charlotte’, ‘Joy’ and ‘Hayley’ each come accompanied by a video courtesy of the band and their friends. One rework and visual piece will drop each day this week, starting today with ‘I Want Another Affair’. The entire rework is dubbed Lost My Key In The ❤️ Club ❤️ and will be available in full on Friday via Kaya Kaya Records - preorder HERE. The original mini-album Love Is the Key to the City is available to stream HERE.

The mini-album has been afforded this beautifully disorientating twist by the band’s principal songwriters 21 year-olds Georgia Ellery and Taylor Skye. Ellery explained, “Whilst Taylor made the tracks, I made the music videos. I did each in a day, with the equipment I had, and I dragged in friends that were available and up for some silliness. I had to match Taylor’s creativeness with the visuals.” Skye adds, “The idea behind these remixes was to make versions of the songs that were ridiculous, instinctive and banging. It was the complete opposite process to the way me and Georgia made the original tracks. It was also done completely home-grown style - the tunes were produced, mixed and mastered on my tiny speakers in my room.”

Ellery describes the idea behind the ‘I Want Another Affair’ video: “My favourite. ‘Blurred Lines’ meets night out in Dalston Superstore. Me and Alex [the boy in the video] love the Negroni they serve in Superstore. My other housemate Ollie Marshall filmed the video and I edited it. We shot it in a pilates studio wearing selected Alex Mullins SS19. The budget for the video was only £14 (taxi there and back), plus the mirror we broke... Right now I’m well into emojis, and really good pop videos (‘7 Rings’). I guess we were trying to emulate a good pop video.”

Hot off the heels from being asked to collaborate and perform at Africa Express’ sold-out one-off show in a circus tent last Friday - alongside such artists as Damon Albarn, Michael Kiwanuka, Afrikan Boy, Gruff Rhys, Joan As Police Woman, Imarhan and Georgia - the band have also been confirmed to perform at The Great Escape, Green Man and End Of The Road (with a string quartet) festivals this summer.

Jockstrap met and formed at London’s Guildhall School of Music and Drama in 2017. Joined live by friends and fellow students Melchior Giedroyc, Michael Dunlop and Lewis Evans, Ellery and Skye have set about creating the sort of intensely bubbling interest that most new bands can only dream of.

Singles from the mini-album drew praise from The Quietus who said the ‘London duo intrigue, transport and transform with smart, glitchy, ‘easy’ listening orchestral pop’ and Dazed who labelled ‘Joy’ ‘Part-lush and lovelorn orchestration, part-hard-as-nails elcetro’. While Loud And Quiet praised the mini-album as a ‘blend of ethereal chamber pop and delicate synths’ and The FADER, who premiered ‘Hayley’, lauded it as a ‘loungey and lightly psychedelic synth-pop tune’. In September 2018, Jockstrap featured alongside A$AP Rocky and Mica Levi on Hackney auteur Dean Blunt’s latest EP release Soul On Fire, furthering their burgeoning reputation as one of the hottest new artists in the U.K.