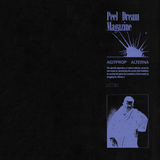 Following 2019's 'Up and Up' EP, Peel Dream Magazine return with the news of a brand new album and share the first single "Pill" (watch the video premiered on Brooklyn Vegan).

After 18 months of writing and playing live with a shifting cast of supporting members, Peel Dream Magazine is back with Agitprop Alterna, their new album which pushes the group’s dreamy, motorik-heavy sound to a deeply melodic and beautifully discordant place.

Released on Tough Love Records on Friday 3rd April 2020, their second LP pays homage to the fuzzy, mod-ish twee of acts like My Bloody Valentine and early Stereolab, but it's also indebted to stateside bands like Yo La Tengo and Rocketship that were cut from a similar cloth. It's part Chickfactor, part Space Age Bachelor Pad; a shambolic, drone-heavy brand of minimalism, filtered through a cross-section of classic indie pop.

Peel Dream Magazine is the musical vehicle for NYC's Joe Stevens, who launched the band in 2018 with the critically acclaimed album Modern Meta Physic. The debut was a mysterious, liminal tribute to the hazy end of ‘90s dream-pop – a masterful mix of first-class songwriting precision and train-window sonic impressionism. Stevens played all the parts on Modern Meta Physic himself, blending live and sampled sounds into uniquely identifiable and abstractly psychedelic soundscapes. The album struck a perfect balance between DIY bedroom pop auteurism and studio wizardry, and duly found its place on numerous “Best of 2018” lists. Where the creation of Modern Meta Physic was a solitary pursuit, Agitprop Alterna found Stevens channelling the collaborative spirit of the band’s ever-rotating live incarnation in the studio. He worked with close friend Kelly Winrich to develop new sounds for the project, creating musical snippets that Winrich would mix into the cohering whole. Live band members like vocalist Jo-Anne Hyun (later replaced by Isabella Mingione) and drummer Brian Alvarez would stop by and work their magic on the recordings, laying down parts with trademark exactitude. The resulting music revels in its realness: heavier, more dynamic, and truly the work of a band.

Each tune’s unique character fits carefully into a broader thematic whole examining personal freedom from manipulation and misinformation. First single “Pill” examines what Stevens calls the "inundation of performances of normalcy and fulfillment that fuel our desire to consume – self-medication for the pain of doubt, want and need.” “Emotional Devotion Creator” frames advertising (and the cynical, manufactured emotional response it elicits) with a critical eye, while “It’s My Body” is an “anthem against people who want to exert power over you and make you feel small…a reminder that you don’t owe anyone anything

Agitprop Alterna is ultimately defined by the tension of difference: between itself and its predecessor; Stevens’ and Hyun’s intertwined male-female vocals; the music’s languid dreaminess and concrete sonic immediacy. Deeply rooted in the Brechtian ideas of art as a tool to spur action, Agitprop Alterna deepens the connection between the existential and the interpretive first explored on Modern Meta Physic, giving the listener space to find their own meaning in shimmering guitars, fuzzed-out synths, and buzzing organ drones. It is a rejection of manipulation in all its forms and a buzzsaw against complacency – soft-focus pop whose clear-cut message is that you get to decide the message. It’s a rare trick to agitate without being obvious: perhaps that makes Agitprop Alterna the most Peel Dream Magazine-like statement yet.