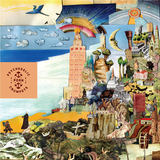 Graduating from the same thriving scene as Aussie heavyweights Tame Impala and King Gizzard and the Wizard Lizard, the unpredictable Perth four-piece spent 2018 dominating sold-out live shows throughout the UK, Europe & Australia, sharing bills with acts including Royal Blood, Interpol and Nothing But Thieves, and firmly justifying the hype with their sprawling barrage of psychedelia.

Having received praise from all corners of the press (DIY, Dork, Clash) and radio (BBC Radio 1, BBC 6 Music, Radio X) since their introduction last summer, "Keen For Kick Ons?" arrives ahead of the band’s highly anticipated return to the UK in February and subsequent debut US tour alongside Frankie & The Witch Fingers, most notable for a slew of appearances at SXSW in March.

Revealing more about the upcoming release, frontman Jack McEwan stated: “Keen For Kick Ons? is about those fruitful days working at a pub. I got fired for getting trollied at an open mic night trying to sing Queen. It seemed like a good premise for a track so I weaved in this narrative of a purple haired French girl who spoke in blotted English but wanted to head out after the bar closed. It's a mix of tour life and reminiscing about my days at Indi Bar, good times”.

With their latest single Keen For Kick Ons?, the emerging psych juggernauts have set the pace for a brand new year ahead: it’s rollicking, it’s relentless and most of all, it’s going to be littered with some unashamedly chaotic hijinx.