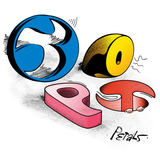 TOPS release their infectious and upbeat new single ‘Petals’ on 5th May via Arbutus Records (Grimes, Sean Nicholas Savage, Doldrums) and is the first taste of the band's new LP ‘Sugar at the Gate’ (release date 9th June). For ‘Sugar at the Gate,' their third and most ambitious album to date, Montreal’s TOPS relocated LA. They lived and recorded at “Glamdale,” a mini-mansion and former brothel located in the Jewel City, Glendale, CA. Absorbing the laid-back, breezy ambience of their new surroundings, TOPS have created a record that unfolds slowly, taking time to reveal the pure emotion tangled within its undeniable hooks. TOPS will tour the UK & EU this June, playing the Southbank Club, Bristol (2nd), The Ritz, Manchester (4th), The Joker, Brighton (5th), The Dome, London (6th), Point Ephemere, Paris (7th), De School, Amsterdam (8th), Ubele & Gefaehrlich, Hamburg (9th), Roter Salon, Berlin (10th), Poglos, Warsaw (11th) and Klub RE, Krakow (12th). Vocalist-songwriter Jane Penny, who is slowly becoming one of the most distinctive vocalists of her generation, took time during the recording learning how to drive in the Forest Lawn Cemetery parking lot. "Living in LA was living out a teenage fantasy, living with your band and practicing in the garage. It was also the first time we've ever had that much space to make music. I took the experience of living LA as a challenge to make music that I know is real to me, in the sense of it feeling true and containing true feelings, but also recordings of great songs, the real thing." Jane Penny and David Carriere (guitarist-songwriter) contributed to the album's lyrics as much separately as together. Both their perspectives are heartfelt, with Penny's sometimes cryptic lyrics betraying something of her unconscious. All of TOPS recordings have been produced by the band, who have self-recorded the majority of their work to date. On 'Sugar at the Gate' we see the return of Riley Fleck's distinct and controlled drumming style, the sensitivity in his playing and strong sense of discretion has now become a distinguishing feature of TOPS' sound.