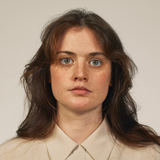 Montreal four-piece TOPS have shared new song and video for "Colder & Closer" from their forthcoming album 'I Feel Alive', which is set for release on the 3rd April via Musique TOPS.

"Colder & Closer" is a shimmering, lean pop production with lyrical meditations on the social isolation that often plagues casual intimacy. The Mashie Alam-directed visual artfully represents this by following singer Jane Penny through an alternating lens of thermal and normal vision.

Speaking on the video, Alam says: "Jane had this really amazing vision where she hoped to convey the feeling of being immensely close to someone. The choice of using thermal footage was made because we wanted to see, feel, and immerse ourselves into the varying temperatures of the body as it heats up, cools down, responds to touch, and feels alone. We created a movement composition that travels between a live-action world and a thermal world! The idea was to visually explore the dynamic of being far (in the live-action world) and being close (in the thermal world)! Eventually, the juxtaposing jumps between the two worlds merge into an immersive thermal universe to evoke a climactic sense of closeness from where there is no return."

‘I Feel Alive’ is TOPS’ fourth full-length, following 2017's ‘Sugar At The Gate’ and follows singles "Echo of Dawn" and "Seven Minutes" from last year. Their trademark sound of beguiling melodies over soft-rock grooves, with touches of '80s sophisti-pop and a contemporary experimental palette, is intact, but bolder and more expansive. The songs manage to be both immediately catchy and deceptively deep, with Penny's literary lyrics adding an extra dimension to the pure pop hooks. Satisfying yet far from predictable, this is a record to be savoured, revealing itself slowly, gaining power and poignancy with each listen.

Beneath the soaring melodies and crisp production, ‘I Feel Alive’ balances the giddiness of a new relationship with the agony of leaving old things behind. It's an introspective record that you can dance to, music that hits in an immediate rush but sticks around, lingering like the memory of a perfect doomed love affair-both the joy and the pain, until it becomes a part of your life forever.

‘I Feel Alive’ will be released on 3rd April via Musique TOPS.