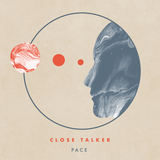 Close Talker is an indie rock band from Saskatoon, Canada. The band has toured throughout North America and Europe, gaining the attention and praise of notable publications such as NPR, Billboard, Clash, Spin, Q Magazine, and Consequence of Sound.

Pace is about fearing your friends will grow up long before you are ready to. It's about people in your inner circle boldly striving toward adulthood without your consent and it evokes a question of allegiance; "whose side are you on?" It gives a voice to the growing pains of those wanting to remain bliss. Pace is about the moment you start to see your friendships, like everything else, fall victim to time.

The video was directed by Ben Giesbrecht in Florencia Bay, BC. In most cases, ourvideos are slow paced, serious, and ambiguous. For this one, we threw all of that out the window and made something completely spontaneous. Taking a step back, I think it captures a lot of what this song is trying to say, which is to still remember the times when you didn't care about having it all together.

Choosing to self produce their upcoming album "How Do We Stay Here?" allowed the band to hold this album close to their chest while it developed organically over the course of 2018 at RMS Labs in Regina, SK. Close Talker, now more than ever, is interested in music that is timeless - music that won't force the listener into feeling a certain way. To achieve this, the band approached each song following a code of instincts and honesty, including a list of 10 commandments by which all decisions were filtered through. Some were practical like: "Start with what you know" while others were more attitude checks or wholistic like: "No ego" All catering to the music coming first.