Back to Softer Still's Music <
Single 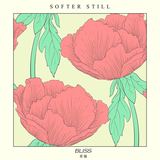 Softer Still are an indie dream-pop band from Shepperton, Surrey consisting of Grant Williams (lead vocals/guitar), Ellie O'Shea (Bass), Alexander Williams (Guitar), Ollie Kitson (Drums). 'Bliss' is the follow up single to their chiming and emotionally gripping debut track 'New Age' which racked up over 60k Soundcloud plays in 3 weeks and gained radio support from the likes of Steve Lamacq, BBC Radio 6 Music and BBC Introducing London. Much like 'New Age' it captures the modern dream-pop sound of the likes of Wild Nothing and Beach House combined with the classic 80's indie pop sounds of The Cure and The Railway Children. The band want the listener to interpret 'Bliss' in their own way, as it defines their own definition of romantic bliss. The Surrey 4 piece are very much a DIY project but manage to capture perfect blissful production from their own studio, located in a garage. 'Lush, beautifully composed dream pop, the Surrey newcomers are reminiscent of Beach House, Galaxie 500, or perhaps even early Wild Nothing. Chiming, emotionally gripping shoegaze with lysergic feel.' - Clash Magazine 'the four-piece glide into view in an ethereal shimmer of shoegazey guitars and light vocals...The message of the song remains thoughtful and important, but it’s the instrumentation that lingers long after, with an air of breezy nostalgia permeating the soundwaves.' - Bittersweet Symphonies Live Friday 26 August @ The Sebright Arms, Hackney, London (On Stage 8.30pm) Tuesday 13 September @ The Victoria, Dalston, London (On Stage 9.15pm)