Back to The Kennedys's Music <
Album 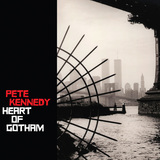 Pete Kennedy's "Heart of Gotham," his first solo effort as a singer-songwriter in two decades, has been called by one listener a "Love letter to New York City." The project, recorded over a five-year period in Pete's Manhattan studio, is a song cycle, with opening and closing themes, and musical and lyrical motifs that recur and unify the narrative thread. Each piece, however, stands alone as a pop-rock song, so the album can be heard as a continuous cycle, or simply as a collection of passionate rockers, delivered in Pete's soulful, roughhewn voice. The songs were written in a series of early morning sessions over coffee at an East Village diner. They deal with the ongoing quest to find one's place, an identity, in the world's most vibrant and diverse city. Better known nationally as a guitarist, Pete does in fact play all the instruments on the collection, as well as singing all the lead and background vocals, but it's really his return to delivering his own lyrics that makes this project markedly different from his two-decades long, and continuing, collaboration with wife Maura, as The Kennedys. Celebrating twenty years as a band and married couple, Pete and Maura are eschewing nostalgia, and defying expectations, by releasing three CDs, comprising forty new recordings, thirty eight of them new original songs. "Heart of Gotham" is Pete's contribution to the triptych. "Villanelle" is Maura's solo project, an inspired collaboration with poet B.D. Love, and the set is rounded out by "West," a classic sounding Kennedys roots-rock album. Prior to Pete and Maura's first meeting at a song swap in Austin, Pete was well established as an award-winning singer-songwriter in his hometown, Washington, D.C., and Maura was a top hand on the Austin scene. Over the course of a dozen duo CDs, they have graciously folded their talent and inspiration into the confluent sound and vision of the Kennedys duo. That collaborative blend continues unabated, with the addition of these contrasting solo projects, and for Pete, "Heart of Gotham" marks a spirited return to muscular, vibrant solo singing and songwriting, and to a classic rock band sound. Pete Kennedy petekennedyguitar@gmail.com 914-924-2143