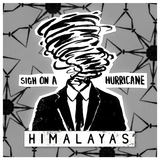 Sigh on a Hurricane

HIMALAYAS ‘Sigh On A Hurricane’ Released October 27 via Peepshow Records ‘This is gonna shake your shackles away. It's proper rock and roll. It’s absolutely brilliant’, Edith Bowman, Virgin Radio “Heard a lot about this band they're great lads”, Gordon Smart, Radio X, This Feeling Track Of The Week ‘Some garage rock and roll straight out of Cardiff’, Huw Stephens, BBC Radio 1 ‘One of Wales’ hottest bands at the moment’, Bethan Elfyn, BBC Radio Wales ‘It's a racket but it's an ace racket’, Adam Walton, BBC Introducing Wales ‘An incredible new single’, Charlie Ashcroft, Amazing Radio FFO: The Amazons, Otherkin, QOTSA HIMALAYAS release their new single, ‘Sigh On A Hurricane’ on October 27 via Peepshow Records, available across all digital platforms. HIMALAYAS create a garage punk noise that hits you with a killer combination of catchy riffs and sing along choruses, all driven by the flamboyant swagger of youth. Earlier this year the band released the incendiary ‘Thank God I’m Not You’ which brought them exposure to global audiences and went on to feature on numerous Spotify curated playlists including The Indie List, New Music Friday, Walk Like a Badass, Rocked., Totally Alternative & New Noise, achieving over one million streams in three months. New single ‘Sigh On A Hurricane’ is another blistering offering from the Cardiff four-piece that that is pure raw energy from the offset. Unapologetically noisy and filled with youthful snarl, the track is a hard hitting anthem on the state of the current political landscape and dwindling quality of discourse. Speaking about the track, lyricist Mike Griffiths said, ‘The track is about the failures of our democracy and and the feelings of insignificance that come with it to the extent that it feels as though nothing anyone says can make a genuine difference.’ The single was produced by Steffan Pringle, who’s worked with the likes of Future of the Left and Estrons, as well as the band’s previous track. HIMALAYAS are an indie/garage rock band from Cardiff formed in 2015, comprising of Joe Williams (rhythm guitar and vocals), Mike Griffiths (lead guitar and vocals), Louis Heaps (Bass) and James Goulbourn (drums). Airplay support includes Edith Bowman Record of the Week & 7 weeks evening playlist, Virgin Radio; Huw Stephens, BBC Radio 1, John Kennedy & This Feeling Track of the Week, Radio X; Elise Cobain & Charlie Ashcroft, Amazing Radio; Adam Walton & Adam Walton, BBC Introducing Radio Wales; The Selector, British Council Music; W!zard Radio playlist; The Sound Lab playlist; Morphettes Radio; Ralph’s Indie Show, RadioKC; Showcase Wales, GTFM; MonFM; Mark Jones, Real Rock Show. They have also featured in the likes of Gigslutz, Little Indie Blogs, The Rock Wolf, Turn Up The Volume, Alternative Friday, Indie Buddie, Indie Underground Blog, Tipping Point, Generator & Vents Magazine, Live Dates 27 August, Reading Festival, (Jack Rocks/This Feeling Stage) 2nd September, Brighton (Hope & Ruin) 7th September, Cardiff (Transport Club) 8th September, Bristol (Mother's Ruin) 9th September, London (Nambucca) 27th September, Leeds (The Lending Room) 28th September, Sheffield (Rocking Chair 29th September, Liverpool (Zanzibar) 30th September, Hoyfest, Cardiff (The Gate) 25th November, Kazoopa Festival, Leeds contact: darren@thelostagency.co.uk | leigh@thelostagency.co.uk www.thelostagency.co.uk | @thelostagencypr LYRICS Sigh On A Hurricane We are not the next candidate This rigid impotence, can only prevent With hideous efficiency The lights came on, and who could consent? Oh well, at least you tried I am a sigh on a hurricane I am a sigh on a hurricane They gave you those come hither eyes But it can't be a sin, if they coaxed you in Imagine the dismay, the surprise So many eyebrows raised, with the sales of gin Oh well, at least you tried I am a sigh on a hurricane I am a sigh on a hurricane