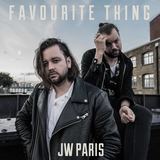 “Their ballsy, intimidating style makes for an anger-releasing, let everything go kind of music”- It’s All Indie
“Influences ranging from Blur to Suede, with songs and a swagger that wouldn’t sound out of place in the 90s” - GigSlutz
“Already being featured on the playlists of football stadiums and pubs alike, for these boys, the only way is up” - BOLD Magazine

JW PARIS have supported the likes of Pretty Vicious, Slaves, The Amazons and Yonaka to name just a few. Their sound has been developing from birth, with Aaron (Vocals/Bass) and Danny (Vocals/Guitar) knowing each other like brothers, as their Dad’s were in the same band throughout the 90’s. Taking influences ranging from Smashing Pumpkins, The Dandy Warhols, Nirvana, FIDLAR, Blur and Sued has given them a raw anglo-american, alt-rock swagger that wouldn’t sound out of place in the brit-pop heyday.

JW PARIS have been described as a ‘Band to watch in 2019’ (Fred Perry Sub Culture) and have gained coverage across GigSlutz, RockShot, Some Might Say and Indie Underground. JW PARIS already have a string of stand out singles under their belt including ‘Darker Side of Paradise’, ‘Rapture’ and ‘Radio’, all mixed by Hugo Nicolson (Grammy award winner who has worked with Primal Scream, Radiohead and Bjork) and mastered by John Davis at Metropolis (U2/Noel Gallagher). These singles have scored coverage across Sky Sports, BT Sports and taken up as a Team GB 2019 sponsorship.

The name JW PARIS name comes from a story about one of the world’s most cursed black diamonds, which originated as The Black Orlov, also known as the Eye of Brahma Diamond. In the early 19th century this diamond was stolen from a statue of the Hindu god which according to legend, this theft caused the diamond to be cursed. In 1932, diamond dealer JW Paris is said to have taken the diamond to the United States and soon after committed suicide by jumping from a skyscraper in New York City. Later owners included two Russian princesses with both women allegedly jumped to their deaths in the 1940s. The diamond was then split into three pieces in order to break the curse and know sits within the Museum of Natural History in New York City.

Of the new single, ‘Favourite Thing’ the band commented, “It was created in the middle of the Joshua Tree desert in October 2018, away from phones, screens and the pressure of social media. We created a song that represented our frustrations with getting our voices heard, not only in our music creativeness but the constant pressure that is put on you to achieve someone’s prefabricated idea of success. We want this song to inspire and influence anyone that feels like they can’t get their voice heard or feel they are powerless to change their current situation. Favourite Thing is an anthem to help you fight back against the generic and mundane.”